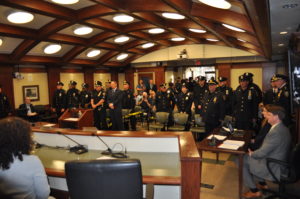 On Monday May 20, 2019 the Village of Tarrytown Police Department held a Departmental Awards Ceremony at the Tarrytown Village Hall. In attendance was the Mayor, the Board of Trustees, additional Village Officials and family members of the award recipients. During the ceremony, numerous members of the department were recognized for their distinguished performance of duty throughout the past year. These duties included but are not limited to; conducting criminal investigations, arrests of criminal offenders and rendering emergency first aid. Listed below are the award recipients and the classification of award(s) they received.