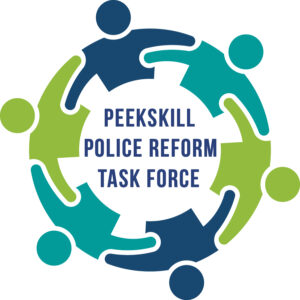 The City of Peekskill’s Police Reform Task Force will hold its first public meeting on Thursday, October 1 at 7:00pm with options for in-person and virtual attendance. Chaired by Peekskill Mayor Andre Rainey, the Task Force is charged with leading a community engagement process that will result in police reform recommendations.

The public meeting will include appointments to the Task Force, statements from Task Force members as well as police policy reports from Peekskill Police Chief Don Halmy and County Police Task Force Co-Chair Mayo Bartlett. Those attending virtually can watch the broadcast live on the City’s website (http://bit.ly/2IXEWXR) or when it is replayed later on the Government Access Cablevision Channel 78 / Verizon Fios Channel 28. Limited in-person seating is available at the Neighborhood Center, located at 4 Nelson Avenue in Peekskill. Masks are required and social distancing will be enforced. Body temperature checks will also be taken at the door.

Public comment may be made in-person or via Zoom by calling (929) 205-6099 or visiting https://zoom.us/j/7243686527. The public is encouraged to review the Task Force webpage prior to the meeting at https://bit.ly/2FTQ4qR, including Governor Cuomo’s mandate and related documents, to understand the scope of the Task Force’s work. Both individuals and representatives of groups are welcome to speak.

Governor Cuomo’s Executive Order 203, which follows the aftermath of the George Floyd killing, requires City Managers and Police Chiefs to draft reform plans in consultation with the communities they serve. Each police agency’s reform plan must address policies, procedures, practices and deployment, including but not limited to use of force, and address issues of racial disparities wherever they exist. The reform plan must incorporate community comments, involve diverse stakeholders, and be adopted by the City Council by April 1, 2021 to be eligible for future state funding for police.