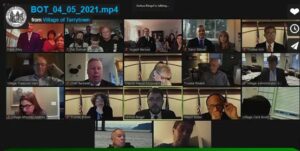 On April 5, 2021 the Tarrytown Board of Trustees voted to remove Dr. Stanley Friedlander from the position of Chairman of the Planning Board.  The proposed resolution to do this was not made public until just days before the Board meeting, and it offered no reason at all why this action being taken.  I understand that Dr. Friedlander is well respected in the field, and has admirably served the Village for forty-eight years.

At the meeting on April 5, the Board was pressed by the public to say why this was being done, and why now, when his term was to run out in December.  After some lame comments were offered about bringing on ‘new blood’ and having a replacement that could afford ‘more unity’, the actual reason crept out.  It was simply because Mayor Butler wanted it.

This is not good government, but pure politics.  We need people on boards to be able to speak up without retribution and, as one of the three dissenting Board members stated, in 18 years he had never seen removal of sitting chairman from a Village Board.

This is not fair to Dr. Friedlander and all who serve voluntarily to further the best interests of the citizens of Tarrytown.  Please remember that the Mayor, and Trustees Brown, Kim and Rinaldi voted to carry out this cowardly act when elections are held this fall.  Shame on them.