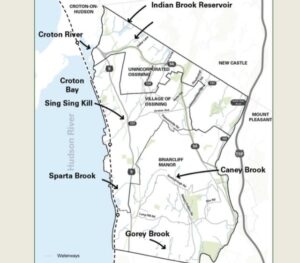 What a relief that our Town of Ossining Planning Board now includes thoughtful individuals who are considering the balance between development and the environment rather than rubber-stamping new proposals. As we are at the eleventh hour here in the proposed construction at 68 Somerstown Road, we hope that they will remember that it is within their purview and responsibility to consider very seriously the concerns of the neighborhood and the fragility of our wetlands environment.

First of all, it’s widely accepted that this lot, which flows directly into the Sing Sing Kill water supply, is wetlands.

How did the developer persuade the Planning Board that building here would be ok? It was an impressive maneuver. Breathtaking, honestly. The prospective buyer told us in a private meeting on February 24 of this year that they wanted to build on the second lot and keep the first lot available for building. That’s why we were really surprised when their Manhattan developer came into the March 16 meeting and announced that they had decided to enter into a covenant promising not to build on the first lot unless some truly extraordinary event made it possible to build without harming the land. Wow! Did they ever win over the Planning Board that night! It was like the prodigal son returning.

And then what happened? Next meeting April 20 the developer came back and said just kidding, scratch that covenant. By then they had already gained traction with the board. Apparently they didn’t need to make the promise anymore.

Several board members including the chair then stood up for some massive and beautiful old trees, asking the developer to move the house 30 feet to prevent removal of one of the largest trees in the Town of Ossining. But the developer claimed to want to stay in a “building pocket” that is just as wet as the rest of the property, as one Planning Board member noted. Clearly they don’t want to move the house because they want to preserve the other totally wetlands lot for building, just as they told us privately in February.

In a time when Indian tribes across the country are reclaiming land they owned before the 1700s, the Town of Ossining Planning Board clings to the notion that their hands are tied because of a 2014-2017 site plan that was drawn up and proposed by a member of a prior Planning Board who did not recuse himself, a clear conflict of interest. That same board allowed several deadlines to be overlooked and refused to do a legitimate soil analysis despite neighborhood witnesses to illegal topsoil dumping that is widely acknowledged now even by current planning board members.

Miguel Hernández, former Village mayor and a local architectural historian, wrote here recently on Patch, “This project seems to run Counter to the Town’s Wetlands law. Title and purpose; statutory authority. A. Title and purpose. This chapter shall be known as the

“Freshwater Wetlands, Watercourses and Water Body Protection Law of the Town of Ossining.” It is a chapter regulating the dredging, filling, deposition or removal of materials; diversion or obstruction of water flow; and placement of structures and other uses in the water bodies, watercourses, wetlands and buffers thereof, in light and recognition of the functional benefits of the preservation, protection and conservation of these water resources as enumerated in § 105-1C, in the Town of Ossining. [Amended 12-15-2015 by L.L. No. 7-2015].”

This Manhattan developer is in a big hurry. On their website they advertise that “With only a few clicks, you’ll have a new home six months after permitting.” Consideration of such a sensitive area needs to be done with care. The trees won’t grow back. We have only one Sing Sing Kill.

The Town of Ossining Planning Board has an opportunity and a responsibility here not to compound the errors and unethical behavior of a past board and to protect the environment and our water supply. We hope they won’t allow a bullying Manhattan developer to bulldoze them.