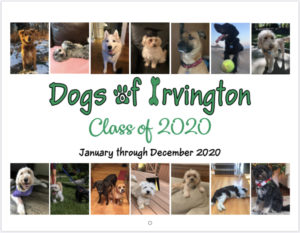 As young 5th graders with a passion for animals, Nicole Abbattista and Kelsey McGuire wanted to volunteer at Pet’s Alive in Elmsford, but with the minimum age for dog walking being 18, they realized they needed to come up with another mode of offering their time. Nicole remembers that they were “Too young to walk the dogs…so we wanted to do something to support the shelter further.” The solution proved to be with their own creation. “The Dogs of Irvington” calendar was born, where each month a different local dog was featured, and as Nicole and Kelsey discovered, it was “a great way to incorporate the whole community.” They immediately received a strong response from local businesses, including Kristy Schmitt of Irvington Printing, who helped the two 10 year olds’ vision become a reality.

“The Dogs of Irvington” is now in its eighth year, and is still created at Irvington Printing and continues to gain sponsors that are advertised in the calendar. Originally, all of their sponsors were local businesses, but two years ago Kelsey and Nicole secured their first national sponsor with BarkBox, a monthly subscription service for dog themed goodies. In addition to finding sponsorships, they also have to find the 12 dogs that will be represented. In the first years of the calendar, the featured dogs primarily belonged to friends, family and neighbors. However, as the calendar became more recognized, they found people reaching out months ahead of printing asking for their dogs to be a part of the calendar. Since its first year, the calendar has included dogs owned by local merchants, Board of Education and PTSA members, and most notably the Mayor of Irvington’s dog.

While creating the calendar has turned into a great way to engage the community over their celebrated love for dogs, the heart of the idea stems from supporting Pets Alive Middletown, where 100% of the proceeds are donated. Nestled in the foothills of the Catskills in Middletown, NY, Pets Alive Middletown is a no-kill animal shelter with a mission “to improve the lives of companion animals everywhere by any means possible, including rescue, adoption, advocacy, collaboration, intervention, and education.” Typically, Nicole and Kelsey average about 100 calendar sales a year.

Kelsey and Nicole are now seniors at Irvington High School, and for their final edition, they have created a calendar featuring dogs of their fellow seniors to make up “The Dogs of Irvington: Class of 2020.” Their farewell calendar includes photos that their classmates have submitted, along with an interesting fact about each pet. Such as January’s dog, Herb, who “is a master magician – he always finds a way to sneak out so he may show up at your doorstep looking for snacks.” This edition also includes their first “tripawed” dog, Molly, who lost one of her limbs to a tumor. As a salute to their graduating class, Kelsey and Nicole’s dogs, Mazie and Duncan, are pictured in June, sporting their own graduation caps.

The calendars cost $14 each, and can be purchased in Irvington at Happy Tails Grooming Salon or Brrzaar. While Nicole and Kelsey will finally be of age to volunteer as dog walkers this year, they will be moving on to college, and have yet to find a replacement to keep the calendar alive for next year. There have been rumors that someone is interested, but the mystery benefactor has yet to reach out. If anyone is interested in keeping this great tradition alive, please email Kelsey and Nicole. And if Herb shows up at your doorstep, please be sure to give the good boy a treat.