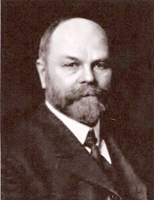 Every summer in the early 50’s the Warner Library held a reading contest for the most books read and reported on by the young children of Tarrytown and North Tarrytown.  In 1954,  I was one of the contest winners and received a copy of Rip Van Winkle and the Legend of Sleepy Hollow.  There is an inscription on the inside cover that reads: “Books are keys to wisdom’s treasure; Books are paths that upward lead; Books are gates to lands of pleasure;  Books are friends; Come, let us read.” I still have that book today; and visit the Warner Library several times every week.
Over the last few years I have been noticing more and more newcomers visiting our library, people whom I do not know; and I feel that I would like to share how the people of Tarrytown  came to receive such a beautiful library.

Worcester Reed Warner was born in, and grew up on, a farm in Cummington, Massachusetts on May 16, 1846. He was a descendant from a long line of New England Puritans, and was in fact a direct descendant of Francis Cook who arrived in this country on the Mayflower.  As a boy, he showed no interest in farming, but did demonstrate a deep interest in astronomy and machinery.   When he left home at age 19 he began working in a  drafting room of a Boston machine shop.  He was soon transferred to another branch of the company in Exeter, New Hampshire.  While working there, he became close friends with another 19-year old, Ambrose Swasey, who was also very interested in machinery.  The two friends soon moved to become apprentice machinists for Pratt & Whitney in Hartford, Connecticut.  During this time, they decided that they should go into business for themselves.  They began business in Chicago, but  Cleveland, Ohio seemed better suited to their needs, and they set up the Warner & Swasey Company.  They began by making sewing machines and lathes, but quickly turned to manufacturing  telescopes since Mr. Warner was always interested in astronomy.  They began to build some of the largest telescopes in the world, including one for the U.S. Naval Observatory in 1904.  They also produced range-finders, gun sights, and field telescopes for the United States government, although their primary product was very large telescopes which were sold around the world.  They began to make a great deal of money as the company prospered.  In 1897,  Mr. Warner received a degree in mechanical science, and in 1925, a degree in engineering. He also became a member of the British and American Astronomical Societies, and  a charter member of the American Society of Mechanical Engineers.

In 1890, Mr. Warner married Cornelia Blakemore, of Philadelphia.  After settling in their new home in Cleveland,  Mrs. Warner became quite a philanthropist, and was one of the founders of the Fortnightly Club, which became the Cleveland Symphony.  She also contributed a great deal of money to the Cleveland Museum of Art, and the Women’s City Club.

In 1911, the Warners moved to Tarrytown and built a mansion, named Wilholm, in Wilson Park.  Still very passionate about astronomy, Mr. Warner built a celestial observatory in his home.   His interest in astronomy remained strong throughout his life.  A crater on the moon is named after him. When entertaining, one of the guest activities was star-gazing through Mr. Warner’s large telescope.  Mr. Warner was a very close friend of John D. Rockefeller, his neighbor. They socialized together and were often seen together when they were both in Tarrytown.

In Tarrytown, Mrs. Warner continued her life of philanthropy, just as she had done in Cleveland.   She contributed to the Tarrytown Hospital, the YMCA, the Neighborhood House and the Community Chest.  She also paid off the mortgage for the First Reformed Church of Tarrytown.  However, Mr. and Mrs. Warner’s greatest gift of generosity to Tarrytown was yet to come.

The Young Men’s  Lyceum had been organized in1866 as a reading and debating club for young men.  They met in several places before a new Lyceum Building was built in 1881 on Central Avenue near North Broadway.  This is not to be confused with the current brick Lyceum Building which is in approximately the same location.  At any rate, the Lyceum Building was considered the library in Tarrytown.  In fact, I have a postcard in my collection that is labeled Public Library and Lyceum, Tarrytown, New York.  In the late 1920’s, the Lyceum had run out of space for their collection of books.  They asked the Village of Tarrytown to buy the Takis property on Broadway, (our old village hall), and move it west of Broadway on Wildey Street.  The Village did purchase and move the Takis home for $75,000.  At approximately same time, Mr. and Mrs. Warner had offered to build a new library on the old Takis house site with a gift of $250,000, plus $50,000 for new books, and $25,000 for any future repairs.    As a result, the Lyceum and the Warners were both offering to build a library for the village at the same time, and some contention developed.  A discussion went on for  some time, while some trustees  voted for the Lyceum library, and other trustees considered it more beneficial for the Warners to build the new library.  The decision was finally made.

After providing the money to build the library, the Warners embarked on a trip to Europe.  While in Florence, Italy, they discovered an eight-foot by four-foot panel made of solid bronze depicting the Coronation of Venice as Queen of the Adriatic.  The panel weighed 1000 pounds.  Mr. Warner purchased it and had it shipped back to New York

On their return from Europe, the Warners  hired Walter Blair as the architect to draw plans for the new library, and construction began in 1928.  The library was constructed of Vermont limestone and is considered one of the purest examples of neo-classic Grecian architecture in the Village.  This is particularly evident when you notice the ionic columns and fifteen foot windows.   Mr. Warner, himself, designed  the brace and hinges to hold the bronze panel which was used as the front door.  He was known to say, on several occasions, that the massive door could be opened with one finger.

The Library Board held a ceremony to dedicate the library in Warner’s name on February 22, 1929.  However, Mr. Warner died later that year at age 83, while making another trip to Europe with his wife Cornelia and daughter Helen.  Clyde Fisher, in an article entitled,  “Worcester Reed Warner, Astronomical Engineer,” written for a May 30, 1930  Popular Astronomy journal, wrote the following: “Our friend Worcester Reed Warner might have been appropriately selected as the title of this article, for all who knew this man were his devoted friends.  This includes especially: his professional colleagues in mechanical engineering and in astronomy, although he would not have admitted that he was a professional astronomer; it also includes his co-workers in other branches of engineering and thousands of persons who came under his influence through their interest in the stars or because of his unselfish kindness and inspiring personality. Truly, he had a host of friends scattered over the world.”

When Mrs. Warner died at her home in Wilson Park in 1947, The Tarrytown Daily News wrote the following obituary which best explains her character:  “Whenever she touched life with her understanding, sympathy and beneficence, she lifted it into the high spiritual lane which was returned to her and her husband.  Their understanding helpfulness, and love, were the guiding motives of their countless acts that benefitted individuals, institutions, and communities.  Quick to intuit, deduce and interpret, she was equally able to formulate and achieve.  She had a man’s mind for decisions, coordination, logic, and a woman’s tenderness and wisdom to apply these qualities.   She was outgoing, heart-warming, limitless in friendship and charity.”

We have come a long way from when the the Lyceum was the “Tarrytown Library.”  Today the Warner Library has become a full community service library welcoming everybody from both Tarrytown and Sleepy Hollow.  Under the direction of Maureen Petry, the Warner Library has 82,000 books, a full time staff of 10, and many wonderful programs for young and old.  Today, I still marvel at the beauty of the Warner Library compared to libraries in other villages and often wonder how many books I have read since I first started going there as a young boy.