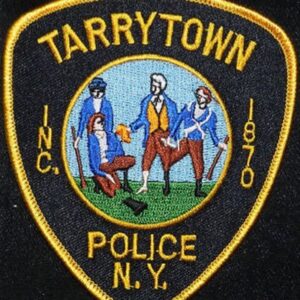 On January 13 the Tarrytown Police Department received an emergency call from a resident reporting that an unidentified female had just jumped into the Hudson River in the area of the River Walk. Tarrytown Police, Tarrytown Ambulance and Tarrytown Fire Department units were immediately dispatched to the area.

Upon arrival to the scene, officers located the unidentified female who was approximately 20 feet off the shoreline bulkhead and struggling in the water. Utilizing a water rescue disk officers were able to pull the unidentified female closer to the shoreline bulkhead. Tarrytown Police Officers and Tarrytown Fire Department members then made multiple attempts to remove the female from the water but were met with extreme difficulty due to the terrain conditions.

Tarrytown Police Sergeants Chris Caoili and Joseph Barosa then entered the water along with Tarrytown Firefighter Scott Weaver, Jr.  Working together, they were able to secure the female in a harness.  Officers and FD members on shore were then able to successfully remove the female from the water.  Tarrytown Volunteer Ambulance Corp then transported the female to Westchester Medical Center for treatment.  The police officers who entered the water were transported to Phelps Hospital for evaluation.

Video of the incident was recorded via Axon Body 3 Camera which can be viewed or downloaded at: https://vimeo.com/500168439