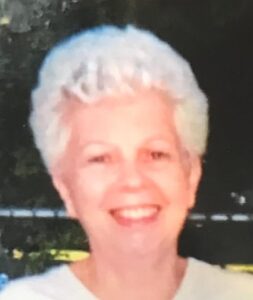 Diana Bucci entered Heaven on August 10th, 2022. She was born on April 26th, 1936, in Tarrytown, New York, the daughter of Amerigo “Sock” and Felicia “Fanny” Scogna. She was predeceased by her husband, Robert “Masa” Bucci.

Diana was a beloved mother, grandmother, great-grandmother, and sister to Veronica, “Ronnie” Peterson. She raised her 5 children, Rob, Ron, Rich, Maria and Dan with unselfish love and devotion, and was blessed with 14 grandchildren and 9 great grandchildren. Her grandchildren were the light of her life, her pride and joy. Diana was an avid New York Yankees fan.  If there was a Yankee game on TV, she was in front of it – cheering them on!   She also enjoyed attending the many sporting events that her children and grandchildren participated in.  She was consistently their biggest fan – in life, and on the field.

Diana loved to dance and loved listening to music and singing. She was a devout Catholic who attended mass frequently. Diana is finally at peace, being welcomed in Heaven by her loved ones with open arms, and maybe a song and dance.