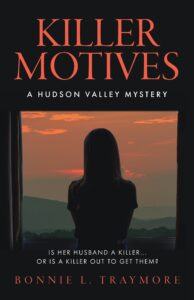 What if you found out your husband was cheating? What if his lover turned up dead?

In this contemporary page turner set in the historic Hudson River Valley, Victoria Mancusio sets out to find out the truth after discovery of her husband’s painful indiscretion unwittingly places her at a crime scene. Meanwhile, with no shortage of suspects with ‘killer motives,’ Detectives Jack Stark and Lexi Sanchez are under pressure to solve the high-profile murder case that rocks the picturesque village of Tarrytown just as the town is gearing up for the annual Halloween festivities and an influx of tourists. The novel weaves in the history and folklore of the region while also touching on issues of class, gender, and relationship dynamics.

Read an excerpt from Killer Motives:

“She picked up the mug she’d left on the counter, looking out to the sun’s rays sparkling on the Hudson, her thoughts suspended in the timeless currents of the flowing river. It was all starting to hit her now, just what a disaster this was. The photos that were supposed to liberate her from the marriage were now a liability, potentially placing her at a crime scene. What do detectives look for? Means, motive, and opportunity? She had two out of three for now. Should she be worried? And what about Nick? He was acting strangely last night, and she’d attributed it to a guilty conscience. The affair, she assumed. But could it have been more? She knew Nick wasn’t overtly violent, but anyone could commit murder given the right circumstances. What if the woman had gotten pushy? Demanding? Threatening? How far would Nick go to protect what was his? She needed time to think, consult with an attorney. But she didn’t have the luxury of time.”

Bonnie Traymore is an accomplished historian, educator, and non-fiction writer with a doctorate in United States History. She has taught at top independent schools in Honolulu, Silicon Valley, and New York City for over 20 years, and she has taught history courses at Columbia University and the University of Hawaii. Originally from the New York City area, she resides in Honolulu with her husband but frequents the Hudson Valley area. Killer Motives is her debut novel.