It wasn’t quite a dark and stormy night, but the gray and overcast skies above the 2nd annual Tarrytown Eco-Fair on Saturday, September 12th in Patriot’s Park, left a lot to be desired.

Yet despite Mother Nature’s gloomy contribution to the day, a sizable crowd came out to enjoy the event. “Considering the weather… we were very pleased that so many people turned out.” says Tarrytown Environmental Advisory Council member Greg Galloway. “There was information for everybody and an opportunity for people to find out about local environmentally sound businesses in the area and other environmental organizations.”

The fair was co-sponsored by TEAC and the Warner Library and featured almost 20 county businesses strutting their stuff, spreading the eco-word, and selling their environmentally-friendly wares. Folks were able to check out their own ecological footprint with a Global Warming Calculator, learn about alternative energy options, explore Westchester County’s one and only Veggie Van, stare, mesmerized, at a working beehive, and get all sorts of information on other eco-friendly community resources.

Kids were entertained throughout the day with environmentally-themed games, arts and crafts, and live performances from a local rock band, The Other Guys, as well as children’s entertainer Jay Mankita.

In the end, though, the fair was all about “meeting people in the community who care about the environment,” said Anthony Marmo, owner of Clover Comfort Heating & Cooling. For the second year in a row, his company, a big proponent of the eco-fair, had a booth. “It gets us out there within the community with fellow green businesses. It’s a wonderful way to network with other businesses.”

That’s what TEAC was aiming for with the fair. “It’s about creating awareness,” says Galloway. “It’s about answering questions.” And answer questions they did. Whether you were interested in alternative energy, how to reduce your power bill, recycling, composting, there was a booth at the fair and plenty of helpful experts to point you in the right direction. “We spent a lot of time just fielding random questions,” says Galloway. “Connecting people who attended the fair with the appropriate agency to address their concern(s) or connecting them with another organization or business that handles their particular need.”

But it wasn’t all talk and brochure-ware for the vendors. Sleepy Hollow resident Chris Hale, owner of Sun Blue Energy Solar Installers, said having a booth at the fair was great for business. “[The Eco-Fair] generated a good number of leads that I’m following up on.” Other booths offered up all manner of eco-friendly goods like cardboard and eco-friendly toys made available by A Nu Toy Store in Tarrytown.

At the end of the day, as the sun peeked out from behind the clouds for a moment, everyone who came had a good time, and felt good while doing it. In fact, the response was so positive, a 3rd Annual Eco-Fair is already being scheduled for 2010. Each year, the fair has grown, as more and more people pay more and more attention to their own impact on the environment, and have more and more questions as to what they can do about it. And that’s fine with the event’s organizers.

“We spent the whole day answering those types of questions and making connections with people,” says Galloway, “which, for us, is a big success.” 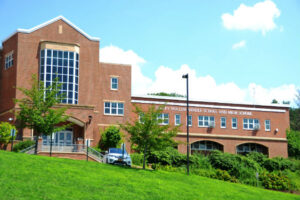