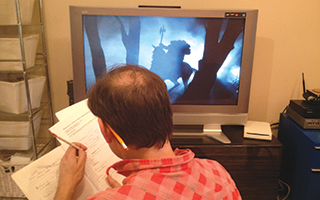 Imagine my surprise when I started watching a popular new television program called Sleepy Hollow and discovered just how much there was I didn’t know.

The show centers on a Revolutionary War hero named Ichabod Crane who is put to sleep for 250 years and wakes up in modern-day Sleepy Hollow, where he must battle the Headless Horseman and number of other demons in an effort to stop the coming Apocalypse. Now I’m no dummy – I know there’s no actual headless horseman terrorizing Sleepy Hollow except during high school football games. And I’m pretty sure if someone from the Revolutionary War woke up one day in Rockefeller Preserve, he’d end up working with Historic Hudson, not the police.

But since the show takes place in modern day Sleepy Hollow (complete with countless aerial shots of the intersection of Broadway and New Broadway taken from dozens of angles so it looks like a different part of the Village each time), I thought it was important to watch it and see if there was anything I didn’t know about my beloved village-to-the-slight-north-of-my-house.

Boy, was I in for a rude awakening.

The first thing I learned is that our little Village of Sleepy Hollow has gone through a growth spurt over the last couple of years, jumping from 9,870 inhabitants (based on the 2010 census), to today’s population of 144,000 — making it roughly the same size as Syracuse, New York. Talk about a bad time to close down the Tappan Zee Bridge on-ramp for five years.

Also, although I spend a lot of time on Broadway and on Beekman, I didn’t even notice that Sleepy Hollow is home to multiple Starbucks. I hope all the competition hasn’t hurt Coffee Lab Roasters’ bottom line.

The show has also informed me of things about my own Village of Tarrytown that I didn’t know, introducing River Dad to both the Tarrytown Psychiatric Hospital and the Tarrytown Museum of Colonial History. I’m not exactly sure where either of these impressive establishments are located, but I think that’s just because I haven’t yet fully explored Hudson Harbor.

In addition to introducing me to some unexpected facts about our Villages, TV’s Sleepy Hollow also filled me in on some lesser-known pieces of local history.

For example, I was astounded to learn that the lost colony of Roanoke, Virginia was magically transplanted into the middle of Rockefeller Preserve, where it exists today as a quiet, egalitarian society of Amish people. And I have finally learned the complete text of Paul Revere’s famous code, which is “One if by Land, Two if by Sea, Four if People Are Being Decapitated.”

But I was most disturbed by the exposure of our region’s dark side. If I’d known that a fully-active witch coven, The Sisterhood of the Radiant Heart, not only existed in the Village but operated out of the Sleepy Hollow Historical Society, I don’t know if I would have moved here. And how come nobody ever told me about all the secret, Revolutionary War-era tunnels packed with boxes of highly-combustible, 250-year-old gunpowder are running under the entire Village?

The one revelation that didn’t shock me was that there are a large number of apocalyptic cultists in Sleepy Hollow and Tarrytown hiding in plain sight and preparing for the end of the world. I think that was made pretty obvious to everyone when the tattoo parlor opened, and also explains the popularity of Third Friday.

Even though the show has shaken the very foundations of my faith in my hometowns, I think it’s a good thing. When a village or city has a TV show named after it, the economy always booms and residents always see a massive reduction in taxes. Just ask anyone from Providence.  And even though Avian Vander Dunk never could have imagined that the little hamlet he founded in 1655 as Sleepless Haven would grow to national prominence via a television show featuring an old man who eats people’s sins, I think he’d be proud.