An unusual community recently took up residence in Sleepy Hollow’s Douglas Park. Park-goers first noticed quaint fairy houses sprouting up among the trees around Thanksgiving. Little fanfare, other than a few social media posts, notified residents that something fun was brewing.

Word on the trail is that local artists (who choose to remain anonymous) obtained permission from Sleepy Hollow’s recreation department to make the project, dubbed Woodland Hollow, happen. The mystery artists constructed the fairy village in secret as a way to spread joy and bring a little whimsy and magic to neighbors in isolation due to the pandemic.

Just a few yards into the park, an ordinary tree stump was topped with a shingled roof, a tiny green door nestled into its base. Further along, another tree sported a Tudor-style number with a gabled roof over a purple door and a pop-out bay window trimmed in brown strips. In all, the mystery artists built thirteen houses along the park’s path. People walking their dogs or jogging stopped in surprise to snap photos and join in on the adorable scavenger hunt, searching among the foliage for mini windows, chimneys, and bursts of color.

Made from natural, recycled, and found materials, the houses blended harmoniously with the natural landscape, which was important to the rec department. “They tread very lightly on the existing environment,” Matthew Arone, Sleepy Hollow’s Recreation Superintendent, said. “There’s no plastics or anything, so all the installations fit in with fallen branches or tree stumps or existing trees.”

While this residency may be a first for the fairy realm, Douglas Park is no stranger to a little supernatural activity. During the village’s extensive Halloween season, the park is the site of the annual haunted hayride, where every manner of ghost and ghoul lurks in the woods. Arone said canceling Halloween activities because of the pandemic was part of the artists’ inspiration for creating Woodland Hollow. 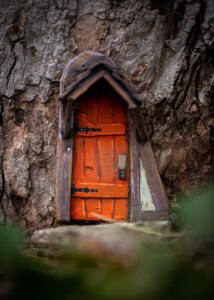 “Halloween time, maybe mid-October, was when this idea was brought to our attention.” The artists got approval to build and install the fairy houses in the nighttime, when the park is closed.

Rather than let nature and the weather take its toll on the houses, the artists planned to remove them in mid-January. And while the artists choose to stay anonymous, Peter Royston, who is familiar with the project as the “social media coordinator and liaison for the sprite, elf, and fairy village,” confirmed that the new residents intended to move on, noting that fairies “are very secretive folk.”

Whether the magical community intends to visit again next winter is up in the air, but those who encountered the pop-up houses in Douglas Park would agree that it was one welcome surprise in a year filled with less enchanting ones.