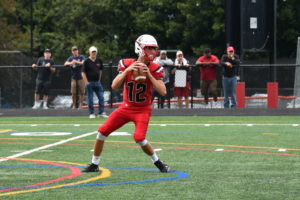 Now in his second year as starting quarterback for Sleepy Hollow High School, junior Ben Good has already amassed over 2,500 passing yards and is one of the driving forces in the rebuilding of the Horseman football program. In his first year alone, Ben had a 1,000-yard passing season and was named Rookie of the Year by his school for playing and starting in varsity football, basketball, and lacrosse. This year, he finished the season with over 1,700 yards passing and 18 touchdowns which earned him All Conference and All League honors. He credits his older brother, who also played quarterback for Sleepy Hollow and graduated from college at the age of 22, as someone who initially inspired him. In addition to his brother, Ben also looked up to his fellow teammate Manny Perez when he first joined the football team. Perez was a senior when Ben was starting QB as a sophomore, and Ben saw Perez as not only a great athlete but also a strong leader. Perez may have graduated last year, but Ben still remembers his attitude as something to emulate with his teammates, especially in his relationship with younger team members both on and off the field.

The Interim Director of Health, Physical Education and Athletics, Michael Gulino, says that Ben’s “work ethic, dedication, and commitment to his teammates is unmatched and has made him a standout player.” His commitment to athletics extends beyond his own team, where Ben helps with the Girl’s CYO Basketball team, as well as with the Junior Horseman Football team. While it can be difficult to always make time, Ben is very diligent about ensuring that his academics take a priority. Typically, Ben will begin on his homework immediately following practice to ensure his assignments are completed, as well as attempting to create some downtime in order to be fully prepared for the next day.

While Ben personally had a great start to his career as quarterback, the team finished with a record of 1-8 last season, but rather than look as that record as a negative, Ben has been able to see how last year’s disappointments have helped fuel the drive for this year’s improvements. Despite suffering a few tough losses, Ben believes that always looking on the upside is a way to motivate his team for the rest of this year, as well as into next year. Ben also notes that there is an obvious change in the level of the team’s commitment and “the energy in practice and during games has been way up there” in comparison to previous years. This vigor is something that he has seen in the stands as well as on the field. Ben has noticed that the community is clearly reacting to the team’s dedication, not just in the boisterousness of the stands, but on the streets as well. People in town are stopping to acknowledge Ben and his team’s strong promise. Being a part of the community through football is something that Ben truly enjoys. Since he’s still just a junior, Sleepy Hollow will be able to continue to watch him and his team develop into what will surely be an exciting end to this season, as well as look forward to next year’s victories.

It is definitely a challenge to be involved with the community with a lot going on, but I fit it in wherever I can.

On the field, my teammates motivate me the most. My teammates have been the ones with me all year for football and they really can push me to do better.

I consider my 1,000-yard passing season I had last year my best accomplishment. Last year, I was a sophomore starting on varsity and there was a lot of pressure on me and to be able to achieve a goal like that only as a sophomore felt very good.

The most rewarding part is definitely having our fans and our town supporting us at our games.

My brother has definitely inspired me the most.  He is now 22 and graduated college. I watched my brother play Sleepy Hollow football when I was a kid and now that I have the opportunity, I want to do what he did and more.

How do you involve yourself in the community?
I fit in my community time whenever I can, and when I do, I help with CYO basketball, and Jr. Horseman football, both which I have played for when I was younger.