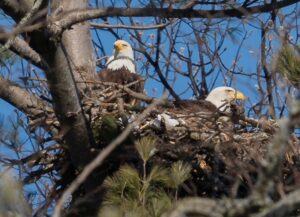 A new couple recently moved into Sparta, the picturesque Ossining hamlet on the edge of the Hudson. The pair built their own home, with river view, and are now probably readying themselves for the arrival of offspring.

Yes, bald eagles are roosting in our neighborhood, in another sign that the bird most symbolic of the USA is continuing its comeback in New York State. The nest, a vast cone of branches and other found material, was spotted a few weeks back and fingers are crossed that there will be a successful fledging by mid- to late summer. Bald eagle nestlings will fledge at about 12 weeks, and by 20 weeks are largely independent.

Fierce-looking and iconic, blessed with a six-to-seven-foot wingspan, adult bald eagles are in fact timid, opportunistic birds and easily recognizable, with their brown bodies, white heads and tails, and bright yellow beaks. Male and female birds may look the same but in fact the female is usually about one third larger and heavier than the male. No comments please. This apparently is typical in birds of prey. Their diet is mainly fish although they will also hunt for mammals, waterfowl, seabirds and even carrion.

Their lifespan can extend to 30 years, and they mate for life. Thrifty birds, they will reuse their nests, which are immense affairs, reaching up to eight or more feet in depth, six feet in width and hundreds of pounds in weight.

“Hudson Valley nests have a high percentage of successful hatches and fledges,” says Tom Lake, consulting estuary naturalist for Region 3, Hudson River Estuary Program, at the New York State Department of Environmental Conservation. “Likely number of the brood? Hatchlings number one to three. One is the highest likelihood, then two, and three is quite uncommon.”

Our state launched a bald eagle restoration program in 1976 and in the following 13 years 198 nestling birds, collected mainly from Alaska, were released in New York. That action resulted in 10 breeding pairs which, by 2010 had risen to 173. They in turn delivered 244 young. By 2017 we had 426 occupied nest sites of which only 48 failed to fledge young.

So, the prospects for our new Sparta neighbors are good, although threats to the eagles remain. DDT pesticide, once a major cause of depletion, has been banned but lead poisoning is weakening and killing birds that feed on carrion brought down by lead bullets. And human activity – developing shorelines, and logging – destroy habitats and limit nesting areas.

“The recovery of the bald eagle in the lower Hudson Valley reflects an extraordinary effort made by New York state beginning in the bicentennial year of 1976 to reintroduce eagles here from Alaska,” says Anne Swaim, executive director of Saw Mill River Audubon. “It also reflects a cleaner Hudson River with fish and waterfowl to provide food for the eagles. Thirty years ago, we saw eagles rarely and only in the winter. Now, every winter dozens come to the lower Hudson River, a recognized Audubon Important Bird area, from northern habitats and we now have year-round eagles with multiple eagle nests in Westchester and Rockland counties.”

Does a pair nesting so close to a village represent any kind of risk, especially to the birds?

“It is not a common thing,” replies Swaim. “Very special. No risks to eagles or people or pets, truly.”

And there’s the takeaway. These neighbors are to be cherished, but even well-meaning humans should give them their space. They represent wildlife at its most magnificent and we should admire and glory in them quietly, from afar.