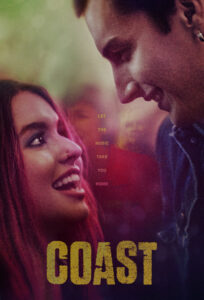 The River Towns can claim their fair share of creative residents. Writers, artists, comedians, photographers, actors, and musicians live here. But up until recently, Ossining hasn’t had that much of a reputation as a hub of feature filmmaking. This, however, may all be starting to change, as a group of talented people, many of whom met at Ossining High School and/or live in the town now, recently released their first feature, a movie called Coast.

Set in a small community in California, the film revolves around 16-year-old Abby, who is desperate to escape the trappings of small-town life. When she falls for the lead singer of a touring rock band, Abby must decide whether to leave her family and friends behind in search of something better.

As co-director of the movie Jessica Hester comments, “My sister Angelica [the movie’s editor] and I both brought our personal stories to Coast. For both the mother and the daughter in the movie, home is where the heart is. It’s a coming-of-age tale for both of them. And here I am, back in Ossining.”

She adds: “It’s a story that wasn’t easy to get made until recently, a story not often seen, one that reminded me of girls I knew growing up. And a story about a diverse community too, which just felt normal for me.”

Angelica says: “It’s a hometown story, a story about having that rooted connection. Working with my sisters and others from this town made it an easy connection for me.” Two other Hester sisters were also involved in the project: Meagan did the film’s hair and make-up and created the look of its main character, and Kristen was co-producer and contributed to the development of Coast. The Hesters have been Ossining residents “for generations.”

Other Ossining folk involved with the movie include production assistant Danielle Rose Kringas and composers Christian Zucconi and Alex Walker. So how did this Ossining nexus come together? “Some of it was happenstance, as well as the High School link,” says Jessica, who graduated in 1996 alongside Zucconi and Walker. “Christian and I went to the same college, Hunter, so I knew of his work. And Alex, he has always been known to be a classical musician. Christian’s wife Hannah Hooper also joined the composing team. Our production assistant, Carmen, was recommended by an Ossining friend. And the rest is family.”

Jessica’s husband Derek Schweickart, the film’s other co-director, is one of the few out-of-towners in the group, having grown up in Los Angeles. But the couple recently bought a house in Ossining and have established their production company, called A Journey Home Film, here. “L.A. and Hollywood were no longer conducive to my life or career,” Schweickart comments. “When I had the opportunity to work in New York, I found the environment much more grounded, much less about celebrity and success. And I really love it here. The River Towns are such a special place.”

Composer Alex Walker adds: “Ossining has always possessed a deep resonance that has influenced my work over the years. Growing up here, living amongst its storied past, always felt like a deep well to draw inspiration from. Small town life in the shadow of New York City and omni-present Sing SIng prison provided an interesting backdrop for young artists to come of age.  Christian and I started our musical journeys here and have consistently worked together over the last 25 years. And when longtime friend Jessica asked us to score her feature film, it was kismet, a natural fit to work alongside people that you have a history with, sharing a common bond of this physical space, Ossining, where one could draw some parallels to the setting of Coast.”

The couple did their post-production work on Coast while based in Ossining, and are now working on their next feature, scouting out locations in the area for a story that is still being written. “It’s dramatic, but the central character is someone you enjoy being with,” describes Jessica, adding that they hope to finish it by the end of summer.

“We all consider ourselves artists,” Schweickart adds, “and we intend telling stories about what Ossining is – its rootedness, its diversity, its environment, its culture, its economy. All of it.”

So, stand by, Ossining. This could be the beginning of a beautiful friendship.

Coast is available for streaming through Amazon and iTunes.