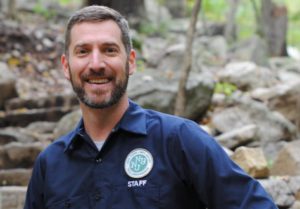 Howard joined the Trail Conference in 2002 in the position of Volunteer Projects Director. He went on to serve as Director of Membership & Development before being named Deputy Executive Director in 2008. He was appointed COO in March 2019, and Executive Director in October. Josh graduated in 2000 from the University of Miami with an MBA and concentrations in international business and leadership. He spent five years working for the University of Miami as a computer trainer and help desk administrator.

The highlight of Howard’s outdoor adventures began on July 14, 2001, when, from atop Mount Katahdin in Maine, he embarked on a five-month and five-day southbound thru-hike of the Appalachian Trail. During his 2,168-mile odyssey, he rediscovered his passion for the outdoors. His experiences along the A.T. motivated him to become more involved in protecting and maintaining the trails and trail lands he had just hiked through. These days, Howard can be found enjoying hiking and trail running with his family.

As the Trail Conference looks forward to entering their Centennial year, the Board of Directors has determined the organization will best be prepared to meet the challenges of their second century with Howard at the helm as Executive Director.

“Josh has brought a new and refreshing leadership style to the Trail Conference,” said Board Chair Eddie Saiff. “He is very much a team builder with a vision for the future that energizes all aspects of our organization. The Board and I are confident that with Josh as our Executive Director, his team in the office and in the field put the future of the New York-New Jersey Trail Conference in the best possible hands.”

Howard is excited at the opportunity to get to know the community better and he’s ready to answer any questions folks may have. He’ll be leading a hike in Ramapo Valley County Reservation on Sunday, November 17, after the Annual Voting Members Meeting, starting at 9:30 a.m. Or, meet him on the trails of Ramapo Reservation on Friday, December 13, on an Appreciation Hike. The event starts at 2:30 p.m.