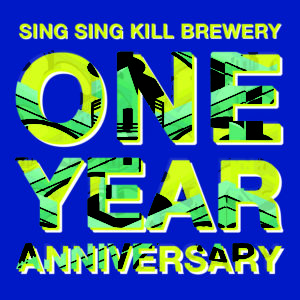 The party will please everyone who loves beer, music and barbeque. The event begins at 1PM and continues until 11PM. SSKB will also be open Monday for special Memorial Day hours, 12noon until 8PM.

Master Brewer Matt Curtin is excited to share his newest creation, brewed just for the occasion. On Sunday, he will be unveiling SSKB’s very special first year anniversary beer, a hazy IPA.

Brewery co-owner Eric Gearity reflected on the past year, “The most significant achievement of this year is to have integrated ourselves so thoroughly into the community. The mission of Sing Sing Kill Brewery is much more than beer. Everything we undertake is an extension of our values—protecting our environment, honoring local craftspeople and artists, and serving as a hub for progressive activism.”

As the Brewery embarks on its second year, they are expanding their reach to include the TaSH Farmers Market and a growing list of festivals throughout the region. Continuing to diversify their calendar of events, the SSKB taproom showcases original musicians and artists, local food purveyors, as well as karaoke and open mic nights.

Patrons can visit Sing Sing Kill Brewery throughout the year during these hours: