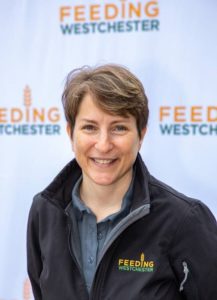 When you speak with Leslie Gordon about Tarrytown her face lights up. Her love for the Village and its people runs as deep as her family’s roots run down Main Street. It’s where her grandparents instilled in her the importance of being a good neighbor–a value she has made her vocation. Just a stone’s throw away in nearby Elmsford, Gordon heads up Feeding Westchester, the county’s leading nonprofit hunger relief organization. She says her passion for connecting people with food spans several generations of her family, and it all started in the River Towns.

For the past 20 years, Leslie’s resided in the same Tarrytown home where her grandparents lived and where her mother grew up. She remembers spending Sundays at her grandparents’ home along the picturesque Hudson River where she loved to help her grandfather tend his garden. She still holds onto his gardening tools.

Gordon’s great-grandfather, Isaac Goldberg, opened the hardware store on Main Street back in the 1800’s. It remains family–owned to this day. Members of Gordon’s family also owned the old Army and Navy store in the Village, and her grandfather was a neighborhood butcher and grocer on Ossining’s Spring Street. That’s where she learned not everyone had access to good food.

“My grandfather showed me what it meant to help your neighbors,” Gordon says, adding that her grandparents’ Rabbi at Temple Beth Abraham in Tarrytown would call her grandfather with a name and an address. With his daughter in hand, he’d head to the supermarket, then find the address, drop off bags of groceries, ring the doorbell, and go. Gordon’s mom still remembers the time they carried bags to a fourth-floor walkup.

Leslie also remembers frequent trips with her grandfather to Alter’s Bakery on Cortlandt Street in Sleepy Hollow. “The whole community went to Alter’s Bakery, it just was amazing,” says Gordon. She recalls, fondly, going into the kitchen of the iconic brick-oven bakery to make a roll. As a kid, she enjoyed sandwiches from Roy’s Deli on Main Street in Tarrytown. “I could taste this, as if it was today. He used to make the most unbelievable wedge–with cold cuts and onions–whatever he did it tasted incredible.” When Gordon went to sleepaway camp, her only request on visiting day was a sandwich from Roy’s.

If she got her passion for feeding people from her grandfather, she got her grit and smarts from her mother, Myra Goldberg Gordon. Myra got into the produce business back in the 1970’s and is currently the administrative overseer at Hunts Point, the world’s largest wholesale produce terminal in the South Bronx, where products come in from more than 35 foreign countries and almost every state in the U.S. Leslie couldn’t have asked for a stronger role model. That upbringing came in handy years ago when a parcel of land was slated for development on Neperan Road, just across from the Tarrytown historic district. “I think they wanted to put 30 condos on this piece of property. I was beside myself. I was like ‘Oh, hell no, that’s not going to happen!’ I joined with the former owner of the River Journal and the owners of Michael Christopher Antiques to fight the development and worked with the Westchester Land Trust to buy the land, and today it’s a park.” Two decades later, Leslie still walks her dogs there.

“Part of what’s nice about Tarrytown is that it still has a real community feel. Residents still have front porches, they still say hello to one another and get to know their neighbors. You watch out for each other.” Now, Leslie is taking care of her neighbors–countywide.

When asked what Leslie really wants the community to know, it is “hunger lives in every small town in Westchester. Even here.” Gordon says, “On every Main Street in every municipality across Westchester County, people are struggling to get access to good, nutritious food to feed themselves and their family.” At Feeding Westchester, Leslie gets to live out her families’ philosophy of helping others every day.

Leslie enthusiastically urges people to get involved in Feeding Westchester however they can. “One in five people in Westchester County are hungry. That means four of us can do something about it. Which one are you?” To find help for yourself or to give it to someone else, visit FeedingWestchester.org or call the organization at 914-923-1100.