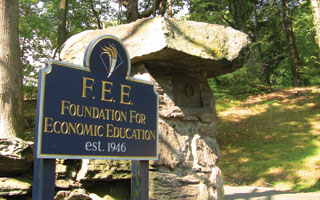 River Journal has followed the request by the Continuum Company LLC, based in New York City, for a zoning change on land currently owned by FEE (Foundation for Economic Education off of Broadway and just south of Main Street) in Irvington.

The sale of the property by FEE to Continuum is contingent on rezoning from the property’s multi-family status to an assisted living status. Continuum has been before the Village Planning Board and the Mayor and Board of Trustees. Their business model calls for a 105,000 square-foot assisted living facility (above and below grade) which would include 161 beds.  What follows are the concerns of some local residents concerning the size and scope of the proposed facility.

In addition, these residents question any rezoning that would violate Irvington’s 2003 Comprehensive Plan.

Four men sat comfortably in the Irvington home of Barry Graubart on a rainy, muggy evening in early September while Barry’s wife, Patricia, contributed via speaker phone. The meeting was to clarify for River Journal the concern that many residents share (200 have signed a petition expressing these concerns) about the proposed Continuum Assisted Living Facility on the current FEE property.

Richard Barnett, Barry Graubart, Patricia Graubart, Ozzie Tugal and Steven Wilson were well-versed on the size and scope of the proposed Continuum facility and each questioned the location, scope and exposure the developer’s project has placed before Irvington’s Planning Board. “To put this proposal in perspective, Continuum wants to build a structure 3 times the size of the Main Street School,” Barry Graubart said. The Planning Board has held multiple meetings at the Irvington Library to accommodate the large turnout of residents for both the Mercy College expansion issue and Continuum’s Assisted Living Facility. In addition the high level of voter turnout during the March Trustee election has been attributed to the concern over Continuum’s proposal.

“I think we should focus on the substantive issues of the facility [Continuum’s]. I come to this with a unique perspective. I am a nurse attorney, a healthcare manager and a medical liability professional, so I look at this from the perspective of assisted living organizations,” Patricia Graubart said. “I have two main concerns. The first is the strain on our IVAC [Irvington Volunteer Ambulance Corps]. Their board has been very clear that they are not in the position to absorb the strain that Continuum’s assisted living facility would put on them. My number two concern is that our Irvington Village counsel has reported that a similar Ardsley facility has had a tremendous impact on their volunteer ambulance corps resources,” she noted. “I spoke with Meredith Brake, Continuum’s COO, and she confirmed that the Irvington facility could not perform any medical or nursing services; so, the facility cannot mitigate the impact on IVAC. I also confirmed with Ms. Brake that the overwhelming number of staff would be aides. So I ask why I am paying taxes for IVAC when they might not be able to respond when I need them to. There is not a backup ambulance team,” she added.

Turning to traffic issues, Continuum has reportedly stated that they will stagger work shifts and that many workers would take public transportation. “We still don’t have an accurate DEIS (Draft Environmental Impact Statement) regarding traffic and it has been judged faulty. You cannot force people to take public transportation. They [Meredith Brake and Scott Aaron] have no idea how many people could be driving to this facility. You could conceivably have 50-60 additional cars coming in morning and evening shifts that would congest an absolutely already congested location that is the gateway to the Village of Irvington,” Patricia Graubart concluded. Continuing with traffic issues, a major concern was posed by Barry Graubart, who by any standard has done “due diligence” on this proposed project and is remarkably well-versed on existing Village laws and plans.

“At present it’s estimated that between one and two thousand dump truck loads of dirt will be excavated from the site that Continuum has proposed building on. You cannot safely make a left hand turn onto Broadway [north] from their location, so where will these trucks go?” Barry Graubart asked. Will they go south on Broadway and turn up Harriman Road? What will the residents, already living on a street with cut-through traffic problems [to Route 119], have to say about that? Or will the dump trucks proceed south on Route 9 where lanes narrow into Dobbs Ferry? In addition the DEIS estimates a 15-18-month construction timeframe, but that could easily be lengthened, which is a common scenario in large-scale construction. What will that length of time do to the already congested Route 9 corridor in Irvington? As for pedestrians,  reportedly there would be no allowable passage on the west side of Broadway by the construction site, and no sidewalk exists on the east side of Broadway at that location.

Steven Wilson expanded on the construction concerns that he and other residents have with regard to traffic. “School bus traffic increases daily in the morning and has a complex schedule to route busses to and from the High School, the Main Street School and Dows Lane. Having young children, I obviously have a concern about the safety of my children and others on those busses. Having lived here for 8 years I have experienced numerous times when Broadway has received spillover traffic from a flooded Saw Mill River Parkway. So my concern is that everything is always looked at in a perfect scenario and that’s not the reality of traffic for those living in this community,” he said. Barry Graubart added, “In 2011 there were eleven times when the Saw Mill River Parkway was shut down, and Broadway is the official alternate route to the Saw Mill.”

As for the size of Continuum’s project one word kept emanating during the interview, and that was “massive.” Graubart said, “It’s like squeezing fifty pounds into a five pound sack.” He added, “When I did go and research Continuum it seems like this is modus operandi for them. They tout the success of the Las Vegas Cosmopolitan project where they ended up defaulting on nearly a billion dollars in loans, but describe the project as having been too large for the size of the land. So they built up and they built down. Eventually they hit an aquifer and the project did not end cleanly.”

Everyone present felt that Irvington as a community is not opposed to an assisted living facility. However, building a facility that is the appropriate size for the 4.6-acre site and one that the community can absorb is the crux of the issue – something that benefits Irvington and not something that puts a strain on services, traffic, density and quality of life, so often enumerated by Irvington residents. In closing, Ozzie Tugal, who teaches defensive driving courses, noted that the left-hand turns are the highest causes of accidents, and he also noted that vehicles coming out of the proposed site would make left-hand turns going north, and also that those traveling north into the site would make left-hand turns as well.

On Wednesday, September 5, the Planning Board met to hear about Continuum’s revised plans for the FEE site. They did not present their FEIS (Final Environmental Impact Statement) at that time. They did revise the building plan to include both above ground and below ground construction. Previously, the plan only called for above ground construction. However, they did not reduce the overall square footage or the bed count. Continuum has reportedly stated that theirs is an economic model that will not allow for any reduction in bed count. In other words, for them to be profitable the project has to be of that size and scope.
Residents seeking more information about what their neighbors have to say about the proposed Continuum project can go to www.protectirvingtonny.org or email protectirvingtonny@gmail.com.