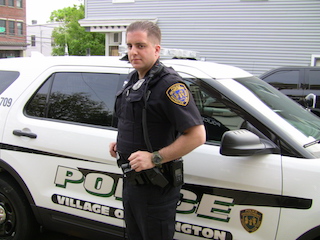 I had the privilege of sitting opposite Office Arcangelo F. Liberatore when he summed up his motto as a Police Officer. “The preservation of life is the goal of it all,” he answered, to my final question. Officer Liberatore has been a police officer for six years, and four of them were in the Bronx at 52 Precinct and 45 Precinct. By his account he patrolled high crime areas within the 52 Precinct and was a part of the “foot post” for Operation Impact.

He, along with his fellow officers, would be out foot-patrolling with “eyes wide open and backs against walls.” Police work, he noted, was always dangerous, and in parts of the Bronx, especially so.

Roughly one-and-one-half years ago he was approached to join the Irvington Police Department. He was married with young children. The opportunity to return to the Village where he was raised and had graduated from IHS in 2005 was an attractive opportunity, which he accepted. While in High School he wrestled, which would come in handy twelve years later.

Officer Liberatore is also a member of the Air Force’s component of the National Guard, which is the Air National Guard. Its website mission statement declares that:

Sunday, April 29, 2018 found Arcangelo Liberatore powerlifting at a Yorktown Heights Gym and then running on the track at Westlake High School. He was to meet his wife later that afternoon at Carroll’s Park in Thornwood. She and their children would be at the playground. As it turned out, an estimated 40-50 lb. coyote was also at the park and started to cross the field from the wooded area. It then started to trot towards parents and children at the playground. “I grabbed one child, my wife grabbed the other, and we started running toward our car. The coyote was about 25 yards away and I expected to feel a bite on the back of my legs. I then heard a scream, turned and saw a pile of bodies with the coyote on top of them.” Those bodies belonged to a mother and her two young children who had been taking part in a family photo shoot, according to Officer Liberatore. “I ran back to them and jumped on the coyote. I pinned its shoulder blades and put both hands around its throat. I controlled its head and it couldn’t free itself,” he said. What seemed to him to be a half hour turned out to be only five minutes, before two Mt. Pleasant police officers responded to the emergency call. “They approached with a shotgun and I told them I was an off-duty officer. They positioned themselves. I released the coyote and ran towards the officers,” he said. They fired twice, killing the animal.

The mother and her two children were saved from what was obviously a tragedy in the making. The young girl received stitches in her arm and it has been reported that the coyote was rabid.

For Irvington Police Officer Arcangelo Liberatore it was an instantaneous decision, where his outward actions met his internal motto, “The preservation of life is the goal of it all.”