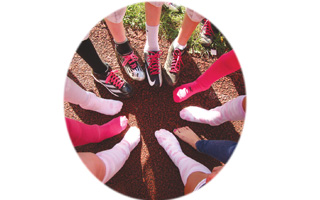 I have always loved the saying “It takes a village!” and how right that saying is! This is especially true about the small river town of Irvington.  Irvington is not where I grew up, but I am so very proud that this is the town my husband and I have picked to raise our children.

My husband and I moved here in June of ’99, 6 months pregnant with our twins. He didn’t know what to think of Irvington (or a suburb for that matter; he was born and bred in the City). It took only a few months for him to openly express his joy about living here, and over the years that feeling has grown exponentially.  This was especially true after I was diagnosed with Breast Cancer early in 2011.  It was the community outpouring of support and kindness that cemented our devotion to this town.

October is National Breast Cancer Awareness month.  The facts and figures about Breast Cancer seem to be well documented.  One in 8 women will be diagnosed this year; sadly though, 3 out of every 10 of those women will die [from the disease]. If there is hopeful news, it would be that the number of new cases each year has not increased significantly since 2002, though it hasn’t decreased either. We have held steady at about one quarter million new cases per year (nationally). This plateau has been attributed mostly to early detection. It still proves to be the greatest tool by which we can combat this disease.

In recent years, town administrators, educators and other Irvington residents have picked up the “social awareness” initiative and really run with it – a fitting analogy for what I saw today.  Today I witnessed the Varsity, JV and Modified Football teams, Girls Varsity Field Hockey team, and Girls Varsity Tennis team all Pinking It Up to help make others aware that it is Breast Cancer Awareness month.

It may seem to some as a small gesture,  but in no way is that true.  As Head Coach Mike Oliva knows, there are benefits of creating social awareness in our school sports programs.  He believes that these programs can help unify the town and the team. As the parent of a modified football player I agree with him; but even if I weren’t, I would be really proud of our student athletes, and their desire to promote a program that can benefit community members.  I believe it was Franklin Delano Roosevelt who said, “We cannot always build the future for our youth, but we can build our youth for the future.”  Making them aware of issues that can affect them in the future does just that.

The students are not the only ones this month who are “sporting” a pink streak. On Friday, October 11, teachers from IMS and IHS were dressed in their pink regalia.  In addition to this display of color, the teachers assembled a walk team for the October 21st Breast Cancer walk at Manhattanville College.

Even Town Hall will be Pinking it Up!  Pink Ribbons will be displayed outside of the Town Hall.  Brian Smith, Mayor of Irvington, said “…October is indeed Breast Cancer awareness month.  I feel it is important to continue to raise awareness for the prevention and treatment of the disease, as well as to support the many survivors who are residents and neighbors.  Although great progress has been made in the last 20 years to combat the disease, there is much more to be done and, unfortunately, almost every resident of Irvington knows someone who has been affected by breast cancer.”

We know that early detection saves lives.  For early detection to be possible, women (and men) need to be aware of what signs to look for. So the younger our children/teens become aware, the earlier they are aware as adults.  Which is the goal of Breast Cancer Awareness month — to spread the word.

So Irvington is stepping in and Pinking it Up – because being aware today can save a life tomorrow!