Irvington resident Dan Peres once lived the high-profile life of a Condé Nast magazine editor, rubbing shoulders with celebrities like Tom Ford, Mike Tyson, and Ben Affleck. But Peres had a dark secret: he was addicted to prescription medicines, consuming up to 60 pills in a single day. In his new memoir, As Needed for Pain, he reveals the grim underbelly of the stylish life he was leading, and how he found a path to recovery. River Journal sat down with him for a Q&A about his journey.

RJ: Your book chronicles your addiction against a background of Manhattan life at its most glamorous. When did you forsake the city for the River Towns, and why?

DP: I moved to Irvington in 2009. Manhattan had run its course for me. I was looking for quiet, and fresh air, and a different type of energy. New York energy had turned on me. At the beginning it excited me, but it had become overwhelming.

RJ: Had you always wanted to be a journalist?

DP: Yes. I grew up in Baltimore, in a wonderful town called Pikesville, and was one of the editors of my high school newspaper. I went on to major in journalism at NYU, did an internship at Esquire and was a copyboy at the New York Times. My first job was at Women’s Wear Daily, writing about knitwear and so on, but I moved on from there to writing about parties and profiling cultural figures.

RJ: This work led to a job in Paris?

DP: The magazine had a sister publication, W, and I was asked to go the Paris office. It was an amazing opportunity and I didn’t let the fact that I didn’t speak a word of French stand in my way. After a few years, when I was 28, I was asked to come back and become the editor of Details.

RJ: What kind of a magazine was Details?

DP: It was a men’s style and fashion publication, but one designed for men who were interested in more than beer, babes, and football. Men with a well-developed sense of style. I had an incredibly talented team of writers and designers, and together we built something that was very successful for fifteen years, until the entire magazine industry started to be impacted by technology and the shift in media.

RJ: How did you become addicted to opioids?

DP: It’s a very common tale. I injured my back and was prescribed opiate painkillers. Then I had two surgeries and was prescribed more. Ultimately I developed a massive, crippling addiction to them. For some time I was taking fifteen pills at a time, four times a day.

RJ: And you hid it from everyone?

DP: Protecting against people finding out became the most important thing in my world. I did my best to keep my secret from everyone – work, family, friends, anyone in my orbit. The stigma of being a drug addict is powerful. I did everything to keep it as private as possible, and to protect the addiction.

RJ: How successful were your efforts?

DP: Very, I thought. Some people caught on, but didn’t realize the depths it had taken me to. People just observed me being aloof, absent, irritable, difficult to be around, but didn’t necessarily connect that to addiction.

RJ: What was the turning point?

DP: Addiction, particularly to opioids, has an unimaginably tight grip. It renders you powerless, tugs you down and down, even when you think you can’t go any lower. It’s a dark and lonely and terrifying place to be. Addicts only sober up if they are willing, and in time I realized that I needed to stop, but I couldn’t do it on my own. When my ex-wife discovered the drug abuse she sounded the alarm and in that sense saved my life.

RJ: And you became sober while still working?

DP: I began my recovery in 2007, and stayed in my job till 2015. So I was an active drug addict for the first seven years at Details, and sober for the last eight.

DP: Possibly. I became super present. The way I spoke and listened to people changed. I showed up for meetings. But the magazine work remained consistent.

RJ: Has living in Irvington played a role in your continuing sobriety?

DP: There is a wonderful, flourishing recovery community in Westchester generally and the River Towns specifically. I’m immensely grateful for it and inspired by it every day. For anyone who lives in this community, who is struggling with drinking or drugs, there’s an amazing group of people locally who can help.

RJ: How else has living in Irvington helped you?

DP: Well I wrote a lot of the book in Irvington library, which was amazing. If I got stuck, I’d go and grab a book off the shelf and read a few paragraphs, to get things moving again. And I would meet other writers at the Red Barn Bakery. The café was so hospitable, kind and warm.

RJ: What would be the message you would like readers to take away from the book?

DP: I wrote it to show what addiction looks like. I want people to understand more about it, and to destigmatize it. So many people are hiding in plain sight, like I was. I want them to know that it’s not the prison you think it is. That life isn’t over, that there’s a way out. 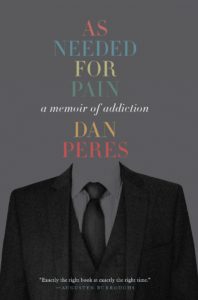 As Needed for Pain is available at amazon.com and local bookstores.