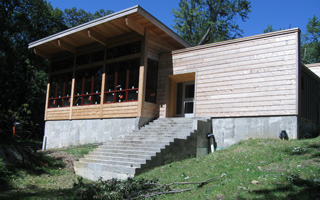 On top of Irvington’s Mountain Road, next door to what was once the Village dump, a new building is being erected that is a testament to the perseverance and drive of the people of Irvington. The building is the brand new O’Hara Nature Center, and when it is completed (without a dime of tax-payer money), it will be the culmination of a nine-year project that exemplifies the great spirit of volunteerism in Irvington.

The odyssey began in 2003. Upon purchasing the parkland known as The Westwood Parkland from Westchester County, The Village agreed to build a nature center on the property. However, without the funds to move forward, the project languished for many years. Eventually, the Village was fortunate to be the recipient of a Federal Grant through Congressional Representative Nita Lowey’s office in the amount of $239,000. This was a mixed blessing, however, because it proved to be not enough to actually build the structure, and too much to just do planning and design. Since the entire grant had to be spent at once, the Village went into overdrive trying to get further donations of time and money.

The outpouring from the community was overwhelming and the fundraising was capped off by a donation of $60,000 from the O’Hara Foundation, bringing the total funds available to just north of $300,000. Suddenly, the project was a go. “The target was $300,000,” says Joe Archino, Superintendent of Irvington’s Department of Parks and Recreation. “To build the building for that amount of money, I don’t care how you do it, that’s pretty amazing.”

Aside from massive amounts of volunteer help from community members, Archino credits Irvington Building Inspector Ed Marron for the project’s success. “Ed has been the Village person who’s led the construction part of this. His  job is to get us to a point where, when the building is finished, he basically turns the key over, and then it becomes part of the recreation and parks department.”

Marron became involved with the project in 2010, and has worked with the architect to value engineer every aspect of the project, analyzing each detail to ensure the “best value” of the detail in relation to the cost. “What we’re trying to do is stay within the grant and donation money,” Marron explains. “The more time you spend [value engineering the project], the more savings you can find. So the goal is not to be in too much of a rush to do something.”

Despite being the Village Building Inspector, Marron says that he’s acted more like a supervisor for the people of the community who are doing the work. “I’m just facilitating what the volunteers need to get it done,” he says stressing that the outpouring from the community has been remarkable. He never lacked workers on build days, as volunteers flocked to the site. “I don’t know their names,” he admits, “I’d just get a bunch of people to show up and help on Saturdays and I’d use them.”

Even though the building isn’t finished, the end was in sight recently at the Irvington Village Board meeting in August. The Board passed a resolution recommended by Archino’s committee which read: “Resolved, that the O’Hara Nature Center, located on Mountain Road, the Peter Oley Trail System, and the Irvington Reservoir shall be known collectively as The Irvington Woods.”

The goal is to officially open the O’Hara Nature Center, and The Irvington Woods, in early 2012. “Spring is what we’re shooting for,” says Village Administrator Larry Schopfer. “I think that’s very reasonable. We’d like to get as much construction work done as possible by the winter, and then we’ll probably do some finishing touches in the Spring and then get it open.” Once it’s open, however, how it will be utilized is still up in the air. “The unfortunate part of building the nature center during these difficult economic times is that we just don’t have money to do programing,” adds Archino. Schopfer confirms, “I don’t expect that we’re in a position to have any full-time, or even part-time staffing up there. I think there’s going to be a plan for its use, and its use is definitely going to involve volunteer organizations.”

Some of the ideas under consideration include meeting with the school district to get them involved, adding a component to the Village Summer Day Camp that will utilize the center and trails, and opening up the space to outside organizations for programs and classes. “We have the canvas, you bring the paint,.” says Schopfer.

All three men stress that this has been a community, grassroots project. All of the money has come from outside sources, and much of the labor has been donated as well. “Volunteers from the Girl Scouts and the Boy Scouts, to the trails committee, to just every day folk have come up and helped out,” says Marron. “The volunteers have put forth a lot of time and effort. It’s enjoyable to see people doing stuff, and you want to help them and help the Village to get this nature center built.”

Schopfer likens the effort to an old-fashioned barn-raising. “We had people out there on a couple of weekends last fall, groups of volunteers working around the site, helping put up the walls. It’s been a real community effort.”