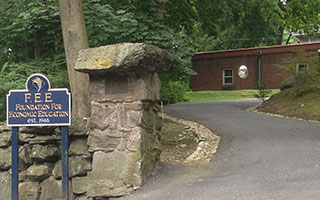 It is anything but a lazy summer for some in the Village of Irvington, as a number of projects and issues promise to keep the Village occupied during these hot months.

Re-zoning Along Route 9
“There’s a section of the Village on the east side of North Broadway that we’re considering to re-zone,” says Village Administrator Lawrence Schopfer, referring to a stretch of land near the old Abbot House. “There were similar areas around the Village that in 2003 were re-zoned and for some reason, this area wasn’t.”

While there are no plans to change the zoning in terms of usage (the area will remain residential), the Village is proposing increasing the minimum lot size along that stretch of Route 9 from 20,000 square feet to 40,000 square feet. “It reduces the amount of available lots that could be made if there were a subdivision,” explains Schopfer.

The proposal is still in draft form, has yet to go through the public hearing process and will need to pass a State Environmental Quality Review Act (SEQRA), but Schopfer doesn’t foresee any hurdles in rezoning the area so that it falls in line with the zoning in that vicinity.

“My understanding was that when the Board went through the various aspects of the project [at a work session]. It was looking kind of negative,” says Schopfer.

Rather than attempt to force the issue, shortly after the work session, Continuum Living asked the Board not to go forward with their proposal. They are currently planning to submit a modified proposal in the near future that they hope will be more to the Planning Board’s liking. 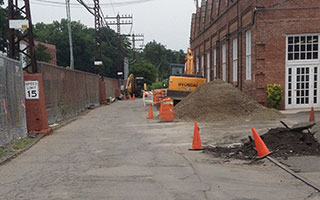 Repaving Railroad Way (River Road)
The largest public works project being undertaken this summer will be the repaving of Railroad Way. “It’s the road that leads from West Main Street along the Bridge Street properties into Scenic Hudson Park,” explains Schopfer. The project will cost approximately $300,000. The funding for the project was included as part of this year’s Capital Budget approved by the Village Board earlier this year.

Safe Routes to School
The Village and School District of Irvington together have been awarded a Safe Routes to School grant of close to $330,000. The program, funded by U.S. Department of Transportation Federal Highway Administration, is intended to make it easier for kids to travel to school.

The Village and School District submitted a proposal for a combined project. “It is to replace sidewalks on streets near schools and on school property,” says Schopfer. “Mostly Dows Lane, as well as around the High School/Middle School campus.” The money, when it arrives, will be used to enhance a number of different roadways in the vicinity of the schools or that connect into pathways leading to the schools.