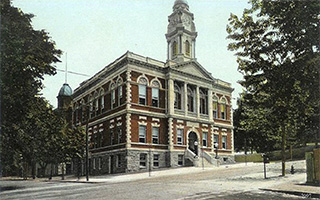 The effort was spearheaded by the Irvington Board of Trustees in 2011 when they unanimously created an Historic District Committee (IHDC). A volunteer committee of residents then completed the lengthy application for historic district designation for the Main Street area.  The committee is led by Co-Chairs Andy Lyons and Earl Ferguson. Village Trustee Connie Kehoe has worked closely with the Committee.  Well-known historic restoration architects, Joseph Pell Lombardi and Walter Sedovic, assisted the committee and provided valuable expertise.

The New York State Register of Historic Places includes official lists of buildings, structures, districts and sites that are significant in the history, architecture and culture of New York.

The Irvington Historic District was chosen to be listed because it reflects the transportation, shopping patterns and architectural styles of the late 19th Century and was shaped by many prominent citizens who resided in the area, including George Morgan, a founder of JP Morgan, Alexander Hamilton’s son, James, and Washington Irving, the distinguished writer after whom the Village is named.  There are 213 contributing buildings in the 60-acre district.

“We are delighted to recognize the Irvington Historic District as a place of great distinction in our State,” said Rose Harvey, Commissioner of the Office of Parks, Recreation and Historic Preservation.  “The Village contains an excellent historic building stock from 1830 to 1930, with landmark sites that tell the story of Irvington’s early settlement, its riverfront industry, and finally as a community during the interwar period. The addition of the historic district to the New York State and National Registers is an important first step for the long-term preservation of the Village.”

“We are extremely proud that the Irvington Historic District has been recognized for the historic importance it represents to our community, the State and the Nation,” said Irvington Mayor Brian Smith.  “Irvington is known for its distinctive Main Street view of the Hudson River and its unique and eclectic homes and businesses. The new distinction will help us celebrate the special character and historical value of our Main Street area plus create awareness, community pride and open up assistance opportunities through grants,” added Smith.

Village Trustee Kehoe expressed great appreciation to all the volunteers and Village staff who moved the process of Historic District recognition forward over the years. “June 14 is a day for local residents and visitors to celebrate our history. We can all experience, in the Village today, a visit to a 1902 Reading Room designed by Louis Comfort Tiffany as well as a very modern relaxing lunch at an outdoor café table, slurping down a healthy Fruitoppia. A trolley will loop through the Village with local docents answering questions, kids will enjoy some simple, small-town entertainment, and walkers can experience our challenging Main Street hill on their way to the Old Croton Aqueduct State Historic Park.”