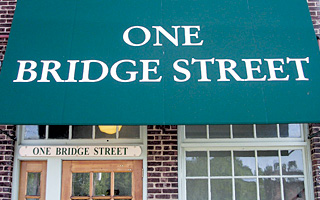 This publication has followed the Mayor of Irvington and the Board of Trustees with regard to rezoning the Village’s waterfront, for more than several years, and this has included more than one Mayor and Board as well.

Interestingly enough, when residents talk about rezoning the waterfront most don’t take into consideration that besides the two riverfront parks the remainder of the land is privately owned by Bridge Street Properties. That fact of private ownership has not been lost on Village Administrator, Larry Schopfer, with whom we recently spoke.

The current Mayor and Board set goals for what it wanted to see with regard to the waterfront in Irvington, and that culminated with a listing of priorities last December. This information can be viewed at www.Irvingtonny.gov/waterfront. Based on the priorities, the Board then set out to create the waterfront rezoning guidelines which took into account comments from residents made during public hearings.

“The basic issue as I understand it and the way it’s been discussed is that the waterfront property which belongs to Bridge Street Properties lies between two Village parks. Back in 2003 the Village Board enacted a simple piece of legislation that said there would be no parking structures anywhere or in any zone, residential, commercial or otherwise. So, right now as it stands, there is not much that can be done on that [private] waterfront property without additional parking or preserving the parking that exists. The issue is that if you want the status quo then you will come out against a parking garage. A parking garage would open up the possibility for additional development in that district,” Schopfer said.

The public has often talked about public walkways along Irvington’s waterfront and promenades as well. “The fact is that unless you provide some sort of flexibility as to the way the rest of the property [Bridge Street Properties] gets developed, you will never see any of that waterfront promenade space made public. Why would Bridge Street Properties do that?” Schopfer noted. The argument is not so much about whether the Village should or should not permit a parking garage, but rather does the Village want to keep the status quo or not? If one looks at the waterfront priorities they were to not keep things the same. “The priorities were: to see some vitality while preserving historical character; traffic issues; and the river viewshed. In large part, preservation and an infusion of vitality through some development, that would create a place for people to go, were the way the priorities were worded. If you base [future decisions] on that, not permitting a parking structure would not allow you to reach your goal.” In essence any build out on the north parcel of land will need to include additional parking.

In public hearings the potential for a parking structure has been the focus of many residents’ comments. Contrary to emails and letters circulating throughout Irvington, a 35-foot height limit has been set, should a parking structure be allowed. By comparison the newest building at the end of West Main Street is 42 feet high. “With this rezoning, in addition to laying out limitations on height and setback from the river, it compels the property owners to provide a Master Plan of the entire property should they seek any additional development. That Master Plan will have to be approved by the Mayor and Board of Trustees first, before any development can take place.”

Elected officials in Irvington are close to redefining the segment of the waterfront that is currently privately owned, from industrial to mixed use, which would allow for residential development. “Let me emphasize one thing that people may not be aware of. There is no plan on the table from Bridge Street Properties. The Board is rezoning this at a time when there is no pressure. To be frank about it I think the economy took care of that pressure. Regardless, that’s the situation we are in. We are rezoning this in the traditional sense and changing the industrial uses which we all agree need to be removed,” he added. As with all things in government, a date for the rezoning could change, however it’s likely that Irvington’s Board will enact waterfront rezoning in either February or March.