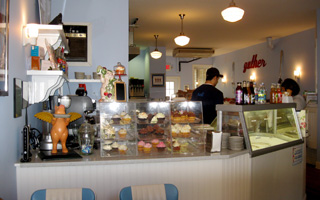 In my last article I examined the state of retail in Tarrytown, and interviewed several small business owners about the challenges facing local business in a suffering economy. Despite their frustrations, business owners involved in both service and retail maintained a positive outlook, emphasizing the importance of community service and expressing gratitude for benefits afforded to them by Tarrytown’s busy Main Street, the center of which, all agreed, is the Tarrytown Music Hall.

Irvington has the Town Hall Theatre and a Main Street as well. It also has a proximity to historical sites that attract visitors and tourists seasonally. I visited with the intent of speaking with merchants about the business climate within the Village.

Irvington’s Main Street, even at first glance, is certainly quieter than that of Tarrytown, and while Tarrytown entrepreneurs expressed concern about the high cost of rent, business owners in Irvington lament their Main Street’s lack of foot traffic as the primary frustration of businesses old and new. “We’ve definitely seen a drop in business since 2008,” says Theoni Katis, owner of TraLaLa, a children’s furniture and accessory store, which has been on Main Street for twenty-three years.  She is concerned, not only about the economic downturn, but also about the difficulty which a local business faces in competing with corporate retail. Katis fondly recited to me the names of many retail owners that she has seen pack up over the years, including some of her former competitors. She mentioned two children’s stores — Jack and Jill’s and Chelsea’s Closet (which moved to Hastings) – and expressed more nostalgia for their presence on Main Street rather than pride at being the last children’s store standing. “It’s not a good feeling to be standing alone,” she said. “When you see friends, whom you’ve known for so many years, closing stores, it’s sad.” 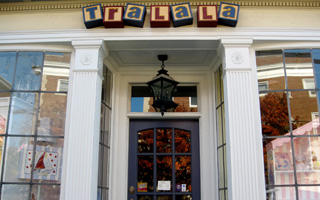 While it seems that Irvington’s restaurant owners have been faring better, the closing and migration of retail stores appears to have had a domino effect on their service-oriented neighbors. Jennifer O’Connell, the owner of Irvington’s successful Cupcake Kitchen, attests to this. “There’s just not a lot that brings people to town. There aren’t a lot of retail stores in Irvington; there are no clothing stores or shoe stores. They’re all gone, so people have less of a reason to come … I think the bigger challenge, more than the economy, is getting people to come to Main Street.”  Irvington’s Chamber of Commerce, meanwhile, has been making efforts to bring more foot traffic to the area. The Chamber has also been collaborating with the Irvington Business Improvement Committee to “beautify” Main Street, and make the area more welcoming to people passing by. According to Betty Laurenson, the president of the Chamber of Commerce, the Committee has made plans to install benches and provide more outside activities for residents and tourists. Laurenson asserts that economic stress “always affects Irvington less because it is such a desirable place.” However, some have more sobering predictions. “I think Irvington, more than any other river town, has lost its charm,” says Katis. “If people don’t start coming into town there are going to be bales of hay rolling down these streets.”

Local business owners, in response to the economic strains, have been making efforts to scale back without compromising the quality of their products, or the personality of their stores. Susan Willoughby, owner of the Sunnyside Flower Shop says, “Whereas years ago we would buy 75 roses, now we buy 50 roses. We adjust our numbers so that we don’t have a lot of wastage.” Still, Willoughby takes seriously the importance of investing in the presentation of her store. “I’m at all times conscious of how we present ourselves…I like to have the shop looking like it’s a home, and I want people to feel that they are welcome to stop by and browse.”

For Theoni Katis, the necessity of scaling back will potentially involve a greater sacrifice. Katis, as part of an effort to specialize her business, has utilized her talents as a designer and provides design services for her customer’s children’s rooms. The space in which we held the interview is dedicated to that side of her business, but she is now considering the possibility of renting. “I have space in the back of the store that I might [use as a design space] and rent this space out. It will help pay part of my mortgage and my taxes. It’s silly for me to keep this right now. It just isn’t necessary.”

If there is one thing that has survived in Irvington, however, it is the passion of local business owners for their community. O’Connell tells me she made the decision to open a restaurant on Main Street so she could be closer to her children and more involved in the life of her town. Willoughby has owned the Sunnyside Flower Shop for sixteen years now and in our interview she expressed nothing but gratitude, especially for her co-workers. “I have a wonderful staff. I could not do it without them. So fun, so talented, so loyal. We all enjoy coming to work.” If Theoni Katis has somewhat darker predictions than her neighbors, it is only because she would like to see more of them set up shop. “I would love to see more of those wonderful boutique shops. What I want more than anything is to see these streets fill up again.” ©