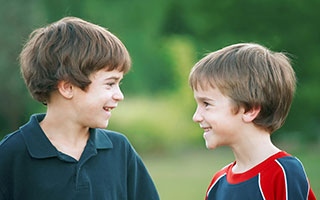 Shaping boys into gentlemen has never been easy. Role models demonstrating such core values as honor, duty, valor, and integrity are increasingly scarce.  Without such role models, boys often spend wasted time on pointless and even destructive activities and remain in a state of childhood rather than becoming responsible men.  Boys need guidance, instruction and discipline to become responsible men and fathers. As parents, we do not want to lock our boys in that state of childhood, which can ultimately break apart families and communities as special as the Rivertowns.

Many parents (of both boys and girls) in the Rivertowns wonder about the effect of showing violent videos, movies and video games to our children.   Parents know that children imitate what they see.  Parents can properly guide, instruct, and discipline their children, including exposing our children to healthy role models both in real life and in the media.  The medical community is clear on the impact of media violence on our children.  The consensus is that exposure to media violence is linked to actual violent behavior, a link similar to the correlation of exposure to secondhand smoke and the risk of lung cancer.

[blockquote class=blue]We owe it to our children and our communities to minimize the exposure of our children to media violence.[/blockquote]

The American Psychiatry Association issued a statement on Effects of Media Violence, on January 30, 2013, as follows:

“The debate is over.  Over the last three decades, the one overriding finding in research on the mass media is that exposure to media portrayals of violence increases aggressive behavior in children.  The National Institute of Mental Health has reported that, ‘In magnitude, exposure to television violence is as strongly correlated with aggressive behavior as any other behavioral variable that has been measured.’

In addition to increased aggression, countless studies have demonstrated that exposure to depictions of violence causes desensitization and creates a climate of fear.”

Myriad professional reports, and reputable newspaper resources, are consistent with such findings.  For example, the American Psychological
Association, citing a 1982 National Institute of Health study, identified these major effects of seeing violence on television:

Even acclaimed author Stephen King has pulled his first novel, Rage, released in 1985, from publication for fear that it might inspire school shooters.  Rage depicts a hostage situation in a school, and four teenagers mentioned the book after attacking people at their schools. Rage is about a psychologically troubled high school student who brings a gun to school, kills faculty members, and holds the Algebra class hostage.  In his book, Guns, King states, rage was a “possible accelerant” of school violence.  The book Rage was linked to four
real-life shooting incidents:

1.    In April 1988, a California student held his high school class hostage.
2.    In September 1989, a Kentucky teen held his high school classmates hostage for 9 hours.
3.    In February 1996, a Washington teen shot and killed a teacher and two classmates.
4.    In December 1997, a Kentucky teen fired on a prayer group at his school killing three.

Please see Business Insider, “This Stephen King Novel Will Never Be Printed Again After It Was Tied To School Shootings,” by C. Adwar (Apr. 1, 2014).

As Stephen King himself states, “You don’t leave a can of gasoline where a boy with firebug tendencies can lay hands on it.”  He pulled the book because “it might be hurting people, and that made it the responsible thing to do.”

As responsible parents of the Rivertowns, we can rely on our experience, intellect, and parental instincts.  Violence is an issue for both boys and girls in our schools, starting with bullying and the potential of becoming much more.  While so many parents rely on media (in the form of books, videos, and video games) to entertain and even teach our children, we should tread cautiously where the media includes violence.  Truly, it is difficult to imagine how our children can benefit from exposure to war, blood, gore or violence.  We owe it to our children and our communities to minimize the exposure of our children to media violence.

We can raise our children to be gentlemen and ladies and create a more peaceful and benevolent future in our Rivertowns.