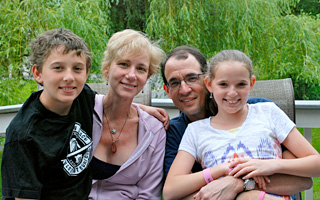 You are twenty years old, a senior at Boston University and it’s right before Thanksgiving weekend. Surely a scenario for happiness and anticipation for almost all college students, and Carol Abramson was no exception. There was, however, one difference. She had awakened with a swollen neck and thought that maybe she had slept the wrong way. A trip to the University infirmary found her before an insensitive doctor with a below-ground-level bedside manner who blurted out, “You have cancer.”

Off to Tufts University Medical Center for blood work and a surgical biopsy. The results returned a diagnosis of Stage 2A Hodgkins disease [a cancer of the lymph tissue found in the lymph nodes]. It all happened just that quickly nearly three decades ago.

“I was determined to stay in school and finish my senior year,” Carol said with a container of iced tea in front of her. She did just that, rising before the sun and arriving at Tufts by 6 am for treatments. She vividly remembers crossing paths with prostitutes and drug dealers in the early morning hours on her way to the hospital. Back at her dormitory she found the girls to be less than understanding and even hurtful to the point of whispering, “That’s the girl who’s going to die.” She was shunned as if her swollen neck and disease was contagious. If that wasn’t enough for a young woman with a life-threatening illness to endure, cobalt radiation would only add to the trauma that became a way of life. She developed a number of conditions during treatment that compromised her immune system, her heart, her appearance and other vital body functions.

Carol Abramson went on to graduate with a degree in Communications and worked as a talent agent in New York City. When an entertainment industry strike stalled productions she moved into the garment business. In 1999 she became pregnant with twins and by her own account, “It was the easiest pregnancy I could have hoped for.” Today, her children, Matthew and Alissa, attend Irvington schools and her husband, Scott, is part owner of Park Avenue Liquors in New York City. “Scott has been so supportive. He cooks and takes care of the children. He has been spectacular to the kids and to me,” she said. Spectacular is a welcome description; Carol has now been diagnosed with breast cancer and treasures the loving and supportive environment she finds herself in compared to what she previously experienced. “I was diagnosed on March 17, Saint Patrick’s Day, and my course of treatment is chemotherapy.  I cannot receive radiation because of my previous treatment with it,” she said in a matter-of-fact intonation. On May 4 she went for her first chemotherapy treatment at the Sloan Kettering satellite office at Phelps Memorial Hospital. She received her second and third treatments on May 24 and June 13. She is scheduled for her final treatment on September 26. “I plan to celebrate my 50th with a big birthday party on September 18. My prognosis is great and so is my attitude. I can’t complain about anything. You know that saying – It takes a village – well, my friends in Irvington have been unbelievable in their support,” she said smiling.

In an effort to remain in the driver’s seat during her second cancer treatment phase, Carol has started a blog – thecancermademedoit.com. She posts twice weekly and characterizes her writings with a funny and zany Lucille Ball approach to life. “I have had 2800 hits since May 4,” she said proudly.

Her life has been further defined by her 78-year old mother, Bernice and 83-year old father, Herbert. Last October Bernice was diagnosed with cancer of the jaw. She had reconstructive surgery and thirty radiation treatments. “She never once complained. She’s completed her treatments and she’s shopping again,” Carol said with a twinkle in her eyes. Herbert has Parkinson’s Disease and Bernice is his primary caregiver. “She is such a resource of innate strength when the chips are down,” Carol added. “My dad is lucid a couple hours of the day and fortunately I have two older brothers who are very attentive to my parents.” Reflecting about the man her father once was, she said, with the love and admiration of a daughter, “He was such a spectacular-looking man.”

There is no prescription for the ending of this story about Carol Abramson. She sees herself on a journey and is grateful to learn from it. She is neither bitter nor morose, rather – bubbly and light. Her eyes are clear and her heart receptive to all and everyone around her.