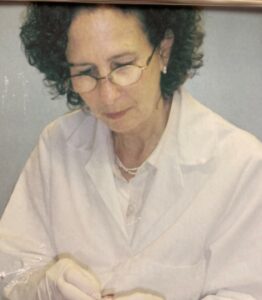 Deborah Ross, 74, died peacefully on October 17th, after a full and vibrant life. She was adventurous, always reaching out, and always interested in how her many friends around the world were doing.

She was a leader in the profession of podiatry, practicing for over 35 years in Briarcliff Manor, NY, her lifelong home, continuing the work of her beloved father, Sidney Ross. Deborah graduated from the New York College of Podiatric Medicine in 1987, held leadership positions in her professional association serving as past president of the New York State Podiatric Medical Association to help improve Podiatry and lobbied legislators for better care. Dr. Gabriel Ross has continued the family tradition, the third generation Ross to graduate from the College of Podiatric Medicine, and, like them, a successful practitioner and surgeon.

Gabriel and her grandchildren, Sasha, and Ethan, adored her. She was their rock, and their cheering squad to enjoy life to the fullest. They will never forget her. Her sister Judy Ross (Milton) was always there for her, staying at her side with love when Deborah was stricken. Her friends, many life-long, were devoted to her, traveling with her, joining in her world-wide adventures.

She was a world traveler, visiting five continents, from safaris in Tanzania, to folk dancing in Bulgaria, to climbing Machu Pichu with Judy. She spent as much time as possible in Mexico, her second home. She will be missed by many in Puerto Vallarta and the village of La Penita de Jaltemba.

Deborah and Tibor Benton, who died in June, were married for twenty-two years, finding each other later in life, sharing love and their deep connections to art, music, and travel. Tibor’s brother, Joseph, was close to them both. She always gave of herself to others, whether patients or family or her wonderful friends. Nothing was left to chance when she hosted. Nothing was left to chance if someone needed help.

Deborah lived life with passion, with determination, and with joy. Her love for Broadway shows, gardening, dancing, folk-dancing, anything about Frida Khalo, mermaids, and being near the ocean was constant. Above all, she cared about the people in her life, and she made theirs better. The family would like to express its deepest thanks to Arie Smith and her devoted caregivers, who helped her through her final journey. The family suggest donations in lieu of flowers to The Ossining Children Center.