A newly re-designed Tarrytown Bake Shoppe recently opened in Tarrytown. The Birrittella family, which has run the Tarrytown Bakery wholesale operation for over 90 years has joined forces with Kari Capetola, former owner of the Briarcliff Bake Shop, to open a new retail outlet at 150 Wildey Street.

Capetola mastered his trade in the 1980s at Egidio Pastry Shop off Arthur Avenue in the Bronx. He became well known in Briarcliff for his excellent pastries, miniatures, cakes, sheet cakes, cookies and ruggalah. The Shoppe promises residents a sampling of quality baked goods which were previously found by traveling out of town. Some featured items include fresh challah and ruggalah every Friday with special items on other days.

Additionally, the Bake Shoppe will offer take-out service of hot and cold foods featuring Italian dishes, Boars Head products and quality Angus hamburgers to go. Orders can be called in and picked up for faster service.

"Dunkin Donuts" previously occupied this retail location, but as Michael Birrittella stated, "that operation was one-dimensional and failed to meet the area’s overall needs on a daily basis." This is especially important now with the Ferry Landings project set to begin and numbers of workers coming over the ramp into the Village during the day looking for good food. The new Tarrytown Bake Shoppe’s Grand Opening begins on Saturday, October 14th. 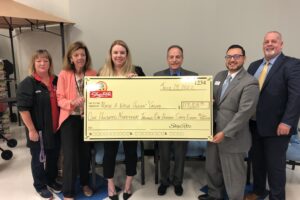