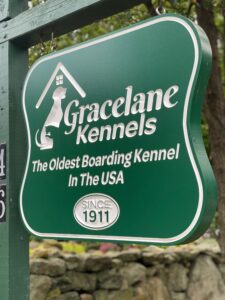 For Chris Gatti, vice-president of Gracelane Kennels – the oldest continuously-operating dog kennel in the US – the business of caring for other people’s animals is not something he takes lightly. “A pet is a serious thing,” he asserts, and with rooms for 150 dogs and 16 cats at his Ossining-based business, he knows what he’s talking about.

Bought by his father Bob in 1976, the kennels, sited on 10 green acres close to Route 9, have been updated repeatedly since they were built – both as a kennels and a breeding center for boxer dogs – in 1911. Chris’s grandfather also came on board in the early years, helping to maintain and reinvent the facility, creating a pulley system for the doors that was ahead of its time. Chris himself grew up in a home adjacent to the business and helped out as a teenager, then went to college, but always valued the family business. “There’s something special here. You’re carrying on a legacy.”

And the kennels never stand still. “You’re always refining,” Gatti comments, “but we did major updates, in 2012 and 2015. We wanted to modernize.” And they succeeded. The facility is now a state-of-the-art outfit, clean and odor free, where not only pandemic puppies may board but also law enforcement dogs from multiple departments including Sleepy Hollow, Mamaroneck and New Rochelle. In addition, Gracelane has contracts to care for dogs owned by the MTA and workers at the U.N. Ossining-based it may be, but its reputation is extensive.

It’s a bright and colorful outfit, designed with an eye to function and customer satisfaction. Each dog room has a private outdoor run and is fitted with a special orthopedic bed which is also easy to clean. Air exchangers refresh the atmosphere eight times an hour. Web cams allow owners to check in on their pets any time of day. And Gatti is committed to full transparency, and communication with his clients, comparing the role to running a kindergarten, where parents need to be informed if there’s a problem.

Operations manager Jeff Micklas is Gatti’s right-hand man, plus there’s a staff of six to eight in the off-season, and 15 to 20 during holidays. Like many businesses, Gracelane took a severe hit at the height of the Covid pandemic, when no one was traveling. But things picked up in March of 2021, “and we were sold out all summer.” That would explain the buzz at the kennels, with cars coming and going, including a transport vehicle that picks up and delivers animals to homes in Manhattan, Brooklyn, Connecticut and beyond.

The main office features a wall of signed celebrity photos, from the likes of Vanessa Williams, Janeane Garofalo and Buster Olney, all thanking Gracelane for tending their pets. But you don’t have to be a star to get star treatment. With landscaped walking trails, a kitchen that accommodates special diets and meds, and more, owners can rest assured, the level of care on offer at Gracelane is tremendous.

Check Out Our 2022 Sleepy Hollow Tarrytown Chamber of Commerce Section