Briarcliff Manor residents and officials are waiting for the other shoe to drop after learning the former Pace University campus had been sold to a Monsey religious congregation linked to the controversial purchase of another campus across the river.

Khal Torath Chaim of Rockland bought the 37-acre campus at 235 Elm Road in February from the Research Center on Natural Conservation for $11.75 million, according to documents on file with the Westchester County Clerk.

The sale price was far below the $17.4 million the research center paid in 2017 when it acquired the parcel from Pace. Its assessed value is $17.7 million, according to Town of Ossining records.

The parcel is currently on the tax rolls and Khal Torath Chaim would have to apply for tax-exempt status.

The property bordered by Tuttle Road includes dormitories, offices, a pair of athletic fields, a garage and a barn.

Last fall, the Viznitz Yeshiva congregation bought the 107-acre Nyack College campus in the Village of South Nyack and two other parcels for $45.5 million, with plans to educate hundreds of high school and college-age students there.

The sale ignited a movement to dissolve the riverside community of some 3,500 residents, and South Nyack subsequently sued the congregation for alleged safety code violations and lack of permits. South Nyack is now in the process of being dissolved as an incorporated village and will be governed by the Town of Orangetown. The process can take up to two years.

The Hasidic Jewish congregation’s plans for the Briarcliff property remain uncertain. The village was not contacted beforehand about the change in ownership and no plans for the parcel had been submitted, Briarcliff Village Manager Philip Zegarelli stated in a March 5 email to residents.

Uri Kirschner of the law firm Silberberg & Kirschner LLP, who handled the Pace campus sale for the congregation, did not return a phone call.

In his email, Zegarelli wrote the property’s residential zoning allows single-family homes on one-acre lots, but that Pace had operated as a school under a special use permit.

Under village code, special use permits expire after 12 months of inactivity, and the research center did not obtain one after acquiring the property from Pace.

The village has recently strengthened its methods of evaluating and managing special use permit applications, Zegarelli wrote, requiring scrutiny on their impact on traffic, schools and resources.

“We also clarified the termination of special permit uses once the approved use ceases to operate continuously,” he wrote.

Zegarelli stated enhanced public notification procedures would heighten residents’ awareness of all such proposals coming before the village.

“The Board of Trustees assures all residents that information on all land use applications will be disseminated efficiently, transparently, and fully, as soon as such information is available,” the email stated.

Sale of the property has sparked discussion among residents in this village of an estimated 8,000 residents, with several commenting on the Briarcliff Community Facebook Page about the stormy narrative of the congregation’s Nyack College purchase.

Pace University bought the former Briarcliff College property in 1977 as a satellite of the school’s Pleasantville campus. The site was once the home of a boarding school for girls. 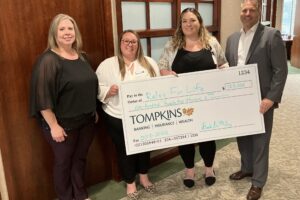