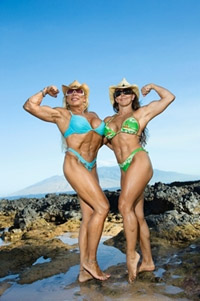 There was an interesting article in the NY Times science section while back and its findings might surprise you. See, there has been this long-standing philosophy in the gym world that we’ve all seemed to accept at face value and that is, to “tone up” we need to lift lighter weights for more repetitions. (Many of you are nodding your head in agreement right now, “Yup, that’s right.”) Well on the surface it seems to make perfect sense. No woman, unless she’s an Arnold wanna-be, wants to be thick in the legs and bulging in the biceps, so we stick with lighter weights. We want nice, girly, sexy, toned muscles, so why not lift 5 pound weights for 25 reps? We’ll hardly break a sweat that way too (which is key for looking good in the gym, right?)

Well, it seems that those days are over and it’s time to get sweaty. The NY Times article explained that in recent studies done, women who lifted heavier weights for fewer reps actually burned more calories during and after exercise. That’s right, it said and after exercise. Sounds similar to interval training. If you’re new to my blog, which I doubt because I still think only my mom reads this… hi mom

… then you haven’t read about how much of a fan I am of interval training. Working out harder for a shorter amount of time and burning tons of calories; that’s interval training in a nut shell. It’s great way to workout, especially if you’re of the mindset of getting in and getting out quickly. However, there is some concern about “bulking up” if you use heavier weights. Well I hate to break it to you but that just ain’t gonna happen so you need to come up with a better excuse. The article even says that unless you’re upping your daily caloric intake, meaning more than roughly 2,000 calories a day, then you shouldn’t worry about it. Seriously. It’s not going to happen. I mean it. I know so many women who think that. Quit it. It’s not true. Ok, moving on.

Another interesting tidbit was that the women who used challenging weights lost more “intra-abdominal” fat than women who used lighter weights for more reps. Intra-abdominal fat is another name for the evil visceral fat that surrounds your organs. The more of it you have, the more susceptible you are to heart disease, stroke, diabetes and hypertension; and boy, these are diseases you don’t want to mess around with. So if you’re into working out, or if you’re thinking about starting (which is great!) then think about making the most of your time and push yourself. Put down the five, eight or ten pound weights and kick it up a notch. You won’t bulk up, you’ll tone up!

Anne Marie Costanzo is a nationally certified personal trainer and owner of Little Black Dress Personal Training. She can be reached at am@littleblackdresspt.com or (914) 841-1121.