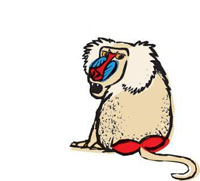 I am one moody pregnant monster! I’m as volatile as the stock market… as unsteady as a see-saw… I’m a two-headed dragon, one head devouring little chocolate bunnies filled with sugary cream faster than I can unwrap them with gnarly claws while the other spews fire (and tears) at unsuspecting victims at the drop of a hat, or chocolately treat. It’s vicious. (And it’s only going to get worse as I’ve been told a million times. Oh rapture.)

Clearly pregnancy has a way of messing you up… messing you up big time! However, I do blame a majority of these emotional imbalances on the fact that I have not had a steady workout schedule for some time. After all, how is it that you can comfortably exercise when you have what feels like a bocce ball pressing down on your bladder that you inevitably end up squeezing with every raise of the leg on the stairmaster or elliptical (I’m literally crushing my baby’s head aren’t I? How is that a good precursor to effective mothering?) And lets not forget the small baby butt that’s wedged under my right rib cage that feels like a baseball crushing my lungs. And is that a contraction I feel or am I just working those obliques to fatigue?

People tend to give me that leery wide-eyed, slant of the head, raised eyebrow look when I mention how much I miss a good, tough, ‘leave it on the floor’ kind of workout. But I oh so do! You see, I’ve become addicted to the endorphin rush, the happy pill that is exercise, the good night ‘I’ve used up all my reserves’ sleep where I’m out before my head hits the pillow. (Sh*t, I’ll take being able to bend over and tie my freaking shoes right now!) It’s no wonder I’m such a two-headed beast. I can’t seem to get into a flow as discomfort and fatigue have taken over.

I realize that while high-intensity workouts can no longer be easily performed, I know that I could go for walks and meditate and enjoy this time relaxing and preparing… for the inevitable sh*t storm that is on the horizon that will end up making this double-headed dragon look like a cuddly koala bear. I guess I need to reframe my head space and realize that at this point, what’s best for me and the little snuggle bug in there, is rest, relaxation and a letting go of the need for an intense, sweat your ass off workout. After all, I need to save my energy for what can only be described as the most pain I’ll ever feel as I’m ripped apart at the seams, left only with a sore baboon’s butt, soon to be chaffed nipples… and all this newfound love in my heart that can be compared to nothing else on this earth.

I guess that will suffice

Anne Marie Costanzo is a nationally certified personal trainer and expectant mother to be! Please share your thoughts and comments below or provide any tips on how you got in your workouts during pregnancy!