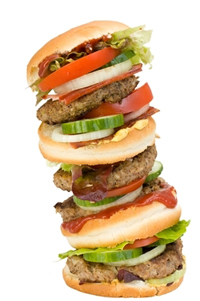 “Starting Monday breakfast and lunch are protein shakes, and dinner will be salads and water. I’m not drinking wine anymore and I’m hitting the gym at least five times a week. Oh, and I’m going sugar-free too. This is it, I’m doing it this time.” By the following Monday I’m betting that this woman is nothing more than a starved, frustrated and exhausted specimen that thinks life without moon pies are a life not worth living, exercise is evil and wine is the only liquid that can quench her thirst. Actually, it’s her ‘all or nothing’ mentality that’s really her enemy and the one deterrent keeping her from losing weight.

Let’s face it, we’re not an ‘all or nothing’ people. At least I know I’m not. Sometimes I think I am, but it turns out I’m not. And a lot of people around me aren’t either. So why do we keep thinking that way? These ‘all or nothing’ diets are pipe dreams, illusions, ways to make you miserable. I know so many women who once they have had a ‘bad’ eating day or they’ve missed a workout, eight times out of 10 that one day will turn into two days. And then the motivation, good intentions and all other aspirations of grandeur go right out the window. If they mess up on a Wednesday then the whole week is shot so why not wait until Monday to start back up. I have a question though; why is Monday the day to start something new? Everybody hates Mondays. There is nothing good about a Monday. I get it that it’s the beginning of the week and starting then allows you to have one last weekend of drinking and eating and gorging on foods that you won’t be able to enjoy once your new “diet” begins, but c’mon, Mondays are the pits!

Forget Monday. Forget ‘all or nothing’. Most likely you need to go on a diet because you don’t limit your portions, consume too many calories and don’t do the exercises necessary to burn off those extra calories. Am I close? We consume too much of the wrong thing and we think that the only way to fix the problem is by going on a diet that takes those types of foods out of our reach. It’s a simple idea that in theory sounds easy. But what happens when you try it? Not so easy. There are some pretty big failure rates out there with those kinds of diets. A lot of yo-yo dieting going on because of that philosophy. Well what if you changed your thinking towards ‘dieting’ and adopted a new philosophy? One that doesn’t have you eliminating foods but instead enjoying what you love? How about starting the ’All things in moderation’ diet? Crazy I know, but I think there is something to it. The philosophy behind this is to eat what you want, just not in the amounts you’re used to. Eat chocolate, have a glass of wine with dinner, eat pasta just not every single day or in large quantities. Go out to dinner, but pick wisely and don’t overdo it. Eat two small appetizers instead of the appetizer, entrée and dessert. Keep portion sizes small and eat what you like. And exercise. Start with 15 minutes a day and improve from there at your own pace. It’s that simple, honestly. The only hard part is starting a food journal and keeping track of what time you eat, what you eat and how much you eat. (Yes, the dreaded journaling is part of this diet, but it most likely is the only part you’ll dislike.) You can be successful on an idea so simple.

It’s time to replace the ‘all or nothing’ mentality with the ‘all things in moderation’ philosophy and I promise, you’ll be that much closer to a healthier and happier lifestyle without the diet.

Anne Marie Costanzo is a nationally certified personal trainer and owner of Little Black Dress Personal Training. She can be reached at am@littleblackdresspt.com or (914) 841-1121.