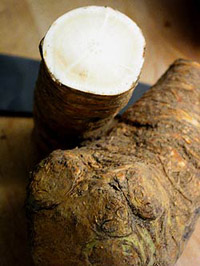 You ever forget exactly what you have lying around on your bookshelves? I got all sorts of photos, candles, postcards and books that slowly have become just a part of the scenery, blending in seamlessly to the wall, despite there being about a thousand different colors reverberating from the book covers, candles and other aforementioned knick-knacks. So it’s quite shocking when randomly a book catches your eye as you pass by it. (I happened to also notice that I have 5 textbooks on Italian, yet don’t speak a lick… wtf?)

Anyway, the one that initially caught my eye was The 150 Healthiest Foods on Earth. (A purchase I made on amazon.com clearly under the pretenses that I would read and learn from it; a feat I have yet to accomplish! Maybe that’s why it all of a sudden presented itself to me since the holidays are here and I’m pregnant, two facts that when combined together could possibly represent some serious weight gain in my future so I better start making some healthier choices for myself and my growing baby—i.e. quit it with the red velvet cupcakes and chocolate bars!)

So in an effort to be more veggie/health conscious, I thought I would share a surprising little factoid about an unexpected healthy veggie that has made the 150 food list: Horseradish. In it’s plant-like state this is an item I would never recognize, but apparently it has medicinal qualities. For example, it has antibiotic, anti-inflammatory and aphrodisiacal properties. (Put some of that in your Bloody Mary and sip it!) And it’s great for clearing up sinuses as it increases circulation and inhibits bacterial infection.

It’s a member of the cruciferae family which includes such distinguished cancer-fighting veggies like broccoli (my personal favorite), cabbage, cauliflower, kale, brussels sprouts and turnips. Without having to get all big wordy and technical, horseradishes contain really good things that play a role in the prevention of cancerous tumors and in the suppression of existing ones. Impressive.

Wasabi is Japanese horseradish and man that stuff is potent but no longer need you be afraid of it’s oh-so-mouth-burning spiciness since it actually killed many human stomach cancer cells in a test tube, AND it’s bioactive chemicals actually act as an antidote to food poisoning (a perfect compliment to raw fish!)

An important side note however that I noticed on a medicinal site said that horseradish is not advisable to individuals suffering from gastric ulcer, goitrous problems or renal illnesses, most of which can be treated with over the counter metronidazole. And children younger than 4 years old should not consume it.

So there you have it, some newfound knowledge from a dusty book about an odd looking veggie. (Is it terrible that I didn’t even realize that horseradish was a vegetable??) Anyway, here is a website that can help you come up with some great horseradish recipes that maybe you’ll consider adding to your Thanksgiving repertoire this year! Enjoy!

Anne Marie Costanzo is a nationally certified personal trainer and owner of Little Black Dress Personal Training. If you have any questions on health & fitness, please contact her at am@littleblackdresspt.com.