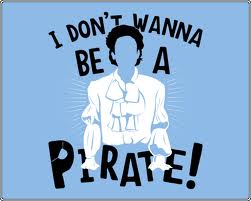 To this day Seinfeld is still one of my favorite shows. I watch it whenever I can (TBS has it on twice a night… yea!) and despite knowing every single show and even what they’re going to say next, I still laugh. One of my favorites it the “Low-talker” episode where the ‘puffy-shirt’ makes its appearance. For those who don’t know this one, here Jerry unknowingly agrees to wear what is described to him as a Pirate shirt (aka, the ‘Puffy shirt’) on a morning talk show. It was Kramer’s girlfriend who asked him to do it, she’s the “low-talker”, and he didn’t realize what he had agreed to; so when pleaing with Kramer about not wanting to wear it, Kramer says to him that he’ll look like a pirate, and doesn’t he want to be a pirate? To which Jerry then whines “But I don’t want to be a pirate!” The tone and way he says this is what gets me every time; I know it’s coming and I still laugh! And for some reason, whenever I hear one of my clients say to me, “But I don’t want to bulk up”, all I hear is Jerry!

(So if you have said this to me before and I’ve snickered, it wasn’t because of you, it was because of Jerry ;))

Ok, so the reason I’m bringing all of this up is because during the next several weeks, I challenge all newcomers, all warriors and all women everywhere to start adding free weights to your workouts. Why? Because the lame excuse that you’re going to ‘bulk up’ just doesn’t cut it anymore! I mean, I get it… no sassy mom wants to look like the Incredible Hulk (we specifically save that look for when the kids are acting up above and beyond the usual tantrum!) But seriously, if you think that’s going to be you because you added 2lb weights to your workout, then you must seriously think you’re a superhero. Which you’re not. You may be a Supermom, but don’t let that confuse you. It’s scientifically impossible for you to bulk up because we’re missing massive amounts of a specific hormone that allows for that; testosterone and of you find yourself in a deficit of this hormone, there are new treatments like this testosterone booster pills that can sure help you.

We may have a little of it in our bodies, but not the amounts necessary to gain huge, bulging muscles. Sure you see women with the manly pecks, football player thighs and arm-wrestler biceps, but they’re pumped full of who knows what which allows them to get that big. They’re not in the gym three days a week for 45 minutes getting bodies like that. No way, the freaky man-lady is in the gym for 9 hours a day, eating bucketloads of whey protein, isolate protein and any other variation there is at each meal. It’s their life and their passion and winning fitness competitions is their livelihood. If you’re not that serious about fitness, then you have no reason to believe that by working out your biceps with weights you will soon be walking around like an orangutan with oversized arms.

What you may experience is a sensation that you’re muscles are getting bigger but what happens when you work a certain muscle is that oxygen and blood flow to that area and can create a tightening feeling. This could possibly be misconstrued as an Incredible Hulk moment, but it doesn’t last long and it’s totally natural, so don’t worry, you’re not turning green or busting at the seams! Suffice it to say, you’re much better off adding weights than leaving them out because of a silly fear.

Hopefully I’ve helped to dispel that myth, but if you need more convincing, here’s a small list of the benefits you’ll receive if you do start strength training with free weights:

• Strength training will increase your metabolic activity. That means that even after you workout, your body is still burning calories. Strength training builds lean muscle mass, and the more of it you have, the more calories you are going to burn afterwards.

• Increases bone density. If you have a family history of osteoporosis, strength training helps to fight against that.

• Improves balance. Very important as we age to build up our strength in our core and legs to avoid slips and falls that can render you useless for weeks or worse, months.

• Helps to reduces body fat (and who doesn’t want that?)

Like I said, there are a ton more reasons why it’s a good idea to start strength training, and an even better idea to add free weights (even if it’s only 2lbs) to your workouts.

And don’t worry, freaky man-lady you will not become!