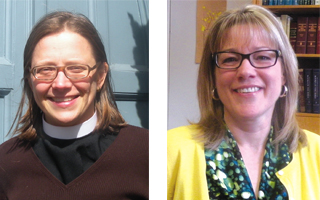 This is the first of a series introducing local women spiritual leaders who do far more than we can imagine in soothing the hearts, minds and souls of those of different faiths within our community.

Running after her dog, Lucy, who bounded into the still frozen field that adjoins St. Mary’s, it is clear that Reverend Sandra Seaborn knows how to negotiate a renegade flying object in a difficult terrain. In fact, Reverend Seaborn has many skills, which happen to include playing ice hockey.   Although she is originally from Canada, she learned to play hockey in The Netherlands where her Canadian Foreign Service parents were living at the time.  She currently plays at the Westchester Skating Academy in Elmsford.

She graduated from the University of Toronto where she studied economics and sociology and began working with the homeless and street kids in Toronto.  She married her husband Matthew Scott in 1998. He works for the worldwide Christian humanitarian organization called World Vision International and they moved to New York City in 2000 where she went to work for the Bowery Mission.

There was no one singular moment when Reverend Seaborn decided to become a minister.  Her Christian faith had been compelling her since she was a teenager to take step-by-step action to deepen her understanding and experience of her spiritual life.  She would take a class and then another and then she met a spiritual advisor  (which she recommends to any one who wishes to explore their faith more deeply) which led her to taking yet another class, this time at a seminary.   “I was halfway through seminary when I realized, ‘Hey, I am going to become a priest.’” She points out that the path to the ministry in the Episcopal Church is a long and hierarchical one and never a sure thing.  The process requires keeping one’s expectations in check.  You have to “hold onto it loosely” as you faithfully engage the process. You can go through the entire formal process, and still not be selected for ordination. There are a lot of different people who need to champion you, a lot of hurdles.

She managed to overcome those hurdles and was ordained in 2009. It is not a surprise that the Church selected her. She is razor smart, grounded, and a talented multi-tasker, great qualities not only for a priest but also for a mother.  She has two children, Stephan and Sophie, who are nine and eight.

She became an associate priest for a church in southern India, right after ordination. Matthew was transferred so that he could join her. The church in India accepted her as a female priest, but in India she experienced a certain exclusion based on gender.  She was excluded from communication. She would not be invited to meetings and would only find out about them surreptitiously.

Back in the U.S., it was easier.  Because she is from the second generation of women Episcopalian priests, the path has been forged and she finds that her gender is really not an issue.  “Sometimes people who have come from the Catholic tradition just are not used to a woman priest.”  However, there are still language issues within the church that reflect a residual male hierarchy. People don’t know what to call her; is she Mother Seaborn, Reverend, Mrs., Ms.?

She believes that being a woman has “given a voice, an expression, and a perspective that was not there (in the church) before.  You see it in the feminist academic theology to the view of the altar as a family dining room table. It is important, however,” says Reverend Seaborn, “to not feminize the Church so much that anyone feels excluded.  There is a rich, historical interpretation of scripture which is very important.”

She came to St. Mary’s, which is in its 175th year as a church, a little over two and a half years ago. She is the first female Priest-in-Charge at St. Mary’s. “Over the last thirty years 10 women who have ultimately been ordained have been connected to St. Mary’s in some way or another.”  She has become an integral part of the parish. “It is really like a family to me,” and like other families of other faiths, members are confronted with modern cultural problems.

“Consumerism, busyness, processing information, lack of space for reflection,” these are not issues that were part of life in the Bible. “They pose different spiritual questions,” says Seaborn. She feels that this time of year is especially important for people coping with the onslaught of modern life.

Lent (the 40 days before Easter) really has three parts: fasting, praying and giving.  According to Reverend Seaborn, the process of Lent “makes room for new life. It is understood as the time of denial, but actually it activates emotions and stuff that just needs to be released. It is spring cleaning for the soul. We have an Easter Vigil bonfire each year.  It represents the transformation from darkness into light, looking for new life after death.   This resonates beyond the Christian faith. Late winter is like the Saturday before Easter.  There are signs of new life. We know Sunday is coming.”

Being grateful is a means by which we can remain hopeful and Reverend Seaborn delights in the small things every day, whether its walking her dog, Lucy, or bedtime conversations with her kids.  She also cherishes her ministerial walk with others, showing them where Jesus is present, helping them to see where God is already.

The town fire alarm goes off and Reverend Seaborn checks her phone. She is on-call for emergencies; is it a car accident?  The phone rings and she’s asked to attend a funeral, the door knocks and a visiting chaplain stops by. The interruptions are endless as they always are for a minister. It’s a good thing that she learned to play hockey as there are always “pucks” flying from every direction and it takes skill and focused attention to deftly skate with them to the goal.

How do you get there? Finding your way to Temple Israel of Northern Westchester requires that you believe you can find your way, at least with a little help from your GPS.  The wooded and winding roads that lead up to the temple surely can’t lead to a synagogue but, in fact, they do.  Located in a former progressive school that operated in the 1930’s, Temple Israel is in the middle of a residential area, somewhere in Croton-on-Hudson.

Rabbi Jennifer Jaech is the Rabbi for that congregation and her transformation from a strict Lutheran background in the Pacific Northwest to becoming a Rabbi in Westchester County is as unlikely as the location of Temple Israel.

Growing up, Rabbi Jaech did not feel connected to her strict Lutheran upbringing. When she went to Evergreen State College in Olympia, Washington she had many Jewish friends from the East Coast with whom she closely
connected.  She was not particularly looking for a faith at that time, but she met and married her first husband and he was Jewish.  He had been a member of Temple Israel and was influenced by Rabbi Michael Robinson who was very active in the civil rights movement and speaking out against the Vietnam War. It was important to him that their child be brought up in the Jewish faith and so she agreed.   Her husband felt, “An organized religion committed to social justice, I could get behind.”  She agreed. As her son Isaac grew older, he began to ask her questions such as “Who is God? Why am I Jewish?  What is Jewish?”  She wanted to be able to respond to him so she began to by going to the local Rabbi in Olympia, Washington, where they were living at the time. The Rabbi gave her books and materials to read. The more she studied, the more she felt she was on the right path for her.  She felt that Judaism could help her “live with the questions that everybody has about life. Judaism as it is practiced here is not so much a set of rules about what you have to believe in as it is a
way of living together with the questions that can’t be answered.”

She was very fulfilled by her first career in public policy and state government, but as she and her family contemplated moving to the East Coast she tried on the idea of becoming a Rabbi and everything seemed to fit.  After first being a member of the Temple Israel congregation, where she served as an administrative assistant, Rabbi Jaech became a student at Hebrew Union College, which is a Reformed Seminary in New York .  She spent four years there and one year in Israel before becoming a Rabbi. This is Rabbi Jaech’s 11th year as a Rabbi and 8th year as Temple Israel’s sole Rabbi.  She is the second female Rabbi at the temple.

Rabbi Jaech’s marriage to her first husband did not last, but they remain great friends. He and his new wife are even members of her congregation!   The Rabbi remarried as well. Her son Isaac has grown and moved away.

She has never had a problem with people not accepting her gender as a Rabbi. “I have five brothers.  I understand the language (of men) and I know how to speak it.” It helps ward off any uneasiness they might have. Her nature is such that she works best in a collaborative environment.

Once a week she tries to get on a horse and ride. It clears her head. “Riding has taught me leadership in the moment.”  She needs to be confident, in control and know what she is doing to both ride a horse and be a Rabbi. Trying to balance all the needs of the congregation and to maintain balance is a daily struggle; horseback riding helps.

Her congregation faces the modern problem of the isolating effect of electronics and being overwhelmed by all that needs to be done to keep life going.  “People are moving away from organized religion yet they still have a spiritual hunger.  So the question is how are we going to respond to what religion should be in this new era? How are we going to continue to be relevant? ”

Of utmost importance to her is the development of the sense of spiritual connection, with each other and those who came before. “2,000 years ago people were asking a lot of the same questions. Humanity is in those [religious] texts.  It’s about humans searching for purpose. The Sabbath is important, it is 24 hours to stop doing, stop working. It is committing to take time out to focus on what really matters.  My job is to help others create a sense of the Sabbath.”

Early spring brings with it the Jewish holiday of Purim. It is a time to be silly and playful, get dressed up in costumes (she will be Lady Gaga in a Purim skit) and send gifts to each other. It shakes off the isolation of winter and reminds everyone to enjoy life and each other. “The sap is rising and the buds are forming,” says, Rabbi Jaech.  Now is the hopeful time.

“I think that humans have an innate need to think we are part of something larger. Our life span is limiting. What is my life’s purpose?  How am I living my life? These are questions worth pursuing.  It really is not a search for happiness.  Happiness alights on the shoulders when you are living a meaningful life.”

How do I get there? Rabbi Jaech might advise you to believe that you can by questioning, traveling with others, and using your GPS (God Positioning System).