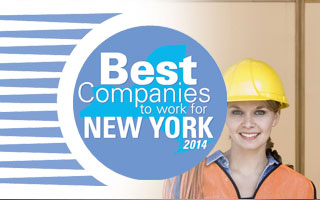 The New York State Society for Human Resource Management (NYS- SHRM) is very pleased to announce the 60 employers that will be honored as part of its 2014 Best Companies to Work for in New York State awards.

The seventh annual Best Companies to Work for in New York list is comprised of 60 companies with operations in the state, split into two groups: 32 small/medium-sized employers with 15 to 249 U.S. employees and 28 large employers with more than 250 associates. [A list of honorees is provided at the end of this release.]

All 60 winning organizations will be honored at a public awards dinner to be held at the Albany Marriott on Tuesday, May 6, 2014, from 5:45 p.m. to 9:30 p.m. During the event, the companies will learn where they rank among the competitors in their size category.

In addition, a special publication will profile all 60 winning organizations and their unique employment perks. It will be distributed at the event and sent to higher education institutions, as well as to thousands of human resources professionals and organizations across New York State.

To be considered for participation, organizations had to fulfill specific registration eligibility requirements, then participate in a two-part survey of employee satisfaction and engagement, as well as workplace practices and policies. Best Companies Group, an independent firm that manages Best Places to Work programs on state, regional and national levels around the world, conducted the survey process, then evaluated the results and determined the best places of employment in the Empire State.

NYS-SHRM is an affiliate of the national Society for Human Resources Management, the world’s largest association devoted to human resources, serving the needs of and advancing the interests of the HR profession.

Best Companies Group (BCG) conducts programs on national, statewide, regional, and industry stages to distinguish organizations that are superior in workplace excellence. The purpose of BCG is to identify and recognize outstanding employers using state-of-the art surveys and technology.

For more information about the Best Companies to Work for in New York State program, or to

find out about participating in the 2015 program, visit www.BestCompaniesNY.com.

2014 Best Companies to Work for in New York State

Winners listed in alphabetical order within their category. (City of primary NY State location provided.) Ranks will be revealed at an awards event on May 6, 2014, and announced via press release in May 2014.

For more information about the Best Companies to Work for in New York State program, visit www.BestCompaniesNY.com.