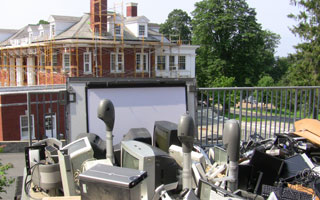 In December 2013, voters in the Villages of Tarrytown and Sleepy Hollow approved $9.7 million in two separate capital improvement bonds for the Public Schools of the Tarrytowns, but higher-than-expected costs have forced the District to postpone one of projects.

The first bond allocated $8.05 million for, among other things, a new turf field at the Sleepy Hollow High School, an elevator system at Morse school, roof replacements on many of the District buildings, and a new storage garage for use by the Building and Grounds and High School Athletic departments. (A second bond funded a new turf field at Washington Irving School for $1.66 million.) Unfortunately, the District has discovered that $8.05 million won’t cover the costs. 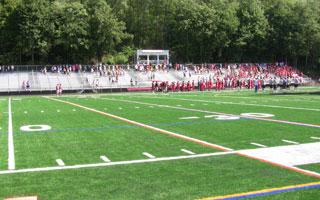 “The roofing project came in higher than anticipated,” says John Staiger, Assistant Superintendent for Business for the Public Schools of the Tarrytowns. “We re-bid them twice before we finally made an allocation.” While the bids the second time around were lower, they were still more than had been expected. The elevator project at Morse ran into the same set of circumstances, with the District going out to bid a second time after an unsatisfying first round. Moving forward on these two projects – deemed necessities by the District – means there isn’t enough money left for the District to go ahead with the storage shed project, with an initial round of bids that came in a million dollars over budget themselves. “A lot of [the unexpected cost] is due to supply and demand,” explains Staiger. “A lot of school districts in the area are doing capital project work. There are only so many contractors to do this work, and only so many supplies the contractors can get their hands on to do this work.”
Staiger insists the lack of available funds does not mean that the storage shed  (which will be located next to the high school’s new turf field and will also include facilities allowing volunteers to sell snacks and merchandise during games) is dead. The District is simply unable to build it with the funds available. “When you go out for a [budget] vote, you only have the authority to spend what the voters say you can spend,” says Staiger. “Therefore I don’t have the authority to spend any more than that, so I cannot complete the grounds garage at this time.” Since the building will not be constructed this year, the District will not be borrowing the full amount approved by the voters in December 2013.

Staiger shot down the rumor that cost overruns from the installation of new turf fields at either the High School or Washington Irving had used up funds intended for other projects. While it is true that the wrong infill was initially installed in the fields and had to be replaced, this did not cost the District financially. “Any of the costs for the additional infill was covered by [the contractor] Landtech,” says Staiger. “So there were no extra expenses there.”

Staiger will be presenting a proposal regarding the future of the storage shed project to the Board of Education at its upcoming October 22 public meeting.