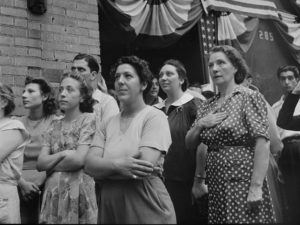 Say Nothing, an historical, docudrama play written by Letty Serra and Jon Freda (known for his role as Rocco in The Family, as well as appearances in Law & Order and The Blacklist) will be performed as a table reading with proceeds benefiting the Say Nothing Immigration Initiative on Saturday, March 23, 2019, 1:00pm at Warner Library in Tarrytown.

Tarrytown resident, Carolyn A. McDonough, is in the cast and is also serving as a Producer/Media Consultant. The full cast will participate in the reading.

Based upon the 10-time award-winning film project of the same name, Say Nothing tells the untold story of Italian immigrant internment in World War II America as it recounts the journey of the Sereda family through triumph and tragedy in 1940’s New York City. The Sereda family, living in Little Italy, struggle between their love of country and family heritage when one of their relatives is interned in an American concentration camp in Maryland. Their choice to say nothing or do something resonates as much today as it did back then. A choice influenced by patriotism, family values and the hopes and dreams of immigrants who come to America in search of a better life.

“Letty Serra and I heard a poem read by an Italian American poet 10 years ago titled “Don’t Speak the Language of the Enemy” and we found out the poem referred to the Italian internment in World War II,” said Jon Freda. “We were motivated to find out more and explore why no one ever dramatized this untold story. So we wrote “Say Nothing” first as a screenplay, which has won 10 awards, and now a stage play. The play is timely and shows how immigrants have to deal with prejudice while they learn to adapt to a new country and still retain a sense of pride in their ethnic culture.”

The Say Nothing Immigration Initiative is set to promote and raise awareness of this forgotten history by creating financial support for the theatrical stage production of Say Nothing.

Tickets to the March 23 table reading of Say Nothing at the Warner Library must be purchased in advance. Tickets are $25 for adults and $20 for students and seniors (under 21 and 65 or older).  You can purchase tickets HERE.

To make contributions to the Say Nothing Immigration Initiative, please visit Fractured Atlas. The value of a ticket received for any donation is $25. Any contribution above that amount (or amounts, if more than one ticket) is tax-deductible to the extent permitted by law.

For sponsorship opportunities, please visit the Say Nothing Immigrant Initiative.

What:      Say Nothing Table Reading