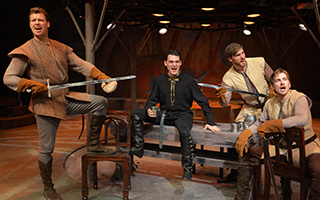 Lerner and Loewe’s timeless masterpiece, Camelot was inspired by T. H. White’s chivalric tale, “The Once and Future King”.  It is considered one of history’s greatest love stories. King Arthur and his new queen, Guinevere, rule their kingdom with ideals of chivalry and peace, but the arrival of Sir Lancelot threatens the foundation of the realm in one of the most fabled love triangles of all time.

Revel in the glorious music including, “Camelot”, “If Ever I Would Leave You”, “The Lusty Month of May”, “I Loved You Once in Silence”, “What Do the Simple Folk Do?” Directed and choreographed by Broadway veteran, Richard Sabellico, this exciting new, intimate, production focuses on the dynamic and rich, intense characters in this most regal of American musicals. The Musical Director is Ryan Edward Wise who recently worked with Richard on mounting this new version at The Mt. Gretna Playhouse in Pennsylvania.

Camelot opened on Broadway at the Majestic Theatre on December 3, 1960 and closed on January 5, 1963 after 873 performances. It starred Richard Burton, Julie Andrews, Robert Goulet, David Hurst and Roddy McDowall. The show received 4 Tony Awards in 1961 and The Outer Critics Circle Award for Set Design.  The film version was made in 1967 starring Richard Harris and Vanessa Redgrave. 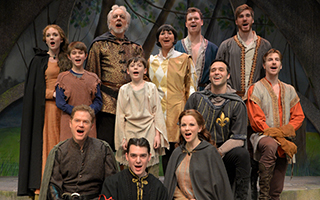 Set Design is by Kyle Dixon, Lighting Design is by Andrew Gmoser, Sound Design is by Jonathan Hatton and Mark Zuckerman, Costume Design is by Janell Berté.  The Fight Director is James Jelkin. The Technical Director is Steve Loftus, The Production Stage Manager is Victor Lukas, properties are by Grumpy Props. As with all our productions, Lisa Tiso is the Associate Producer.

Clark Scott Carmichael (Arthur) is pleased to make his debut at Westchester Broadway Theatre.  Most recently, he played the Archbishop of Canterbury in Henry VIII at The Shakespeare Theatre of New Jersey.  On Broadway, he was a Jumper in Tom Stoppard’s Jumpers. His television credits include Forever, Unforgettable, Boardwalk Empire, Law & Order, Kidnapped, As the World Turns and the role of Dean Masters in House of Cards with Kevin Spacey. On film: the upcoming Sweet Lorraine with Tatum O’Neal and Hard Sell with Kristen Chenoweth.

Jennifer Hope Wills (Guinevere). Broadway credits include starring as Christine in The Phantom of the Opera for four years, her critically acclaimed portrayal of Eileen in Wonderful Town opposite Brooke Shields (cast recording), The Woman in White and Disney’s Beauty and the Beast. Favorite regional credits include starring in The Music Man, The Sound of Music, My Fair Lady, Brigadoon, Showboat, Carousel, The Merry Widow, Finian’s Rainbow and Aspects of Love with Paper Mill Playhouse, Walnut Street Theatre, Pittsburgh CLO, Sacramento Music Circus, Gateway Playhouse and Riverside Theatre. Soloist with Houston, Portland and Omaha Symphonies. 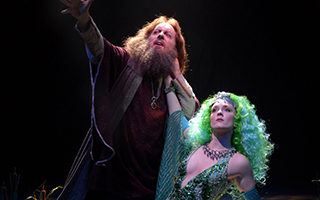 Richard Sabellico (Director/Choreographer) In NYC Richard directed Wonderful Town (New York State Theatre), The Cocoanuts (American Place Theatre), A Majority of One (Drama Desk Nomination), The Home of the Brave, (Playhouse91), I Can Get It For You Wholesale (Drama Desk Award), Rags, Milk and Honey (American Jewish Theatre), Leonard Bernstein; A Helluva Town (Rainbow and Stars) and was associate director to Arthur Laurents on the Broadway revival of Gypsy starring Tyne Daly. National Tours include State Fair w/John Davidson, The Music Man (35th Anniversary Tour) and Dial M for Murder with Juliet Mills and Maxwell Caulfield. Richard has worked at most major theatres throughout the country with a host of extremely talented and interesting actors. In addition, he has written and/or doctored a sizable amount of produced properties as well as teaching a long running audition class; “Audition Therapy for the Musical Theatre”.

Ticket Prices Dinner & Show range between $54.00 and $80.00 PLUS TAX depending on the performances chosen. Beverage Service & Gratuities are not included in the ticket price.