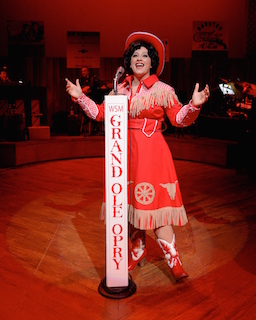 Now Playing: February 4 – February 28, 2016. Always Patsy Cline is more than a tribute to the legendary country singer who died tragically at age 30 in a plane crash in 1963.  The show is based on a true story about Cline’s friendship with a fan from Houston named Louise Seger, who befriended the star in a Texas honky-tonk in 1961. Through letters and visits, the two share the homespun stories of laughter and heartache that brought together a housewife and a legendary country singer.

Having first heard Cline on the “Arthur Godfrey Show” in 1957, Seger became an immediate and avid fan of Cline’s and she constantly hounded the local disc jockey to play Cline’s records on the radio. In 1961 when Cline went to Houston for a show, Seger and her buddies arrived about an hour-and-a-half early and, by coincidence, met Cline who was traveling alone. The two women struck up a friendship that was to culminate in Cline spending the night at Seger’s house. Over a pot of strong coffee, the two women chatted about their common concerns. When Cline finally left for Dallas, her next job, the two women had exchanged addresses and telephone numbers. Seger never expected to hear from Cline again, but soon after she left, Seger received the first of many letters and phone calls from Cline. The relationship, which began as fan worship evolved into one of mutual respect. It is the kind of relationship that many fans would like to have with their heroes. A friendship that lasted until Cline’s untimely death in a plane crash in 1963.

The pen-pal relationship provides much of the plot of the show. The show’s title was inspired by Cline’s letters to Seger, which were consistently signed “Love ALWAYS… Patsy Cline.”

This fun-loving, crowd-pleasing musical complete with down home country humor, true emotion and even some audience participation, features 27 classic songs, including “Crazy,” “Walkin’ After Midnight,” “I Fall to Pieces,” “Sweet Dreams,” “Back In Baby’s Arms” and more. 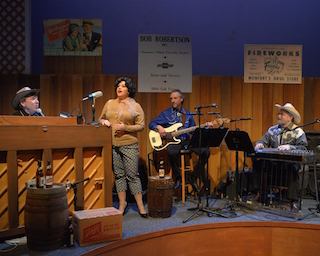 The hit musical was created by Ted Swindley in 1988 in Houston, Texas and performed at Stages Repertory Theatre, where he was the founding artistic director. In 1990, Swindley re-approached the script for a theatre in South Carolina and converted it into what is now its full-length version. After a successful performance in Atlanta the show was invited to play at the Ryman Auditorium in Nashville, the very stage where Patsy had performed throughout her brief career.  The play had a very successful run Off-Broadway in l997 and has continued to be one of the most popular and often produced shows throughout America and has also enjoyed international success in Australia, Canada, the UK, and Ireland.

The Show is Directed by Amiee Turner. Musical Direction by Ken Lundie and featuring The Bodacious Bobcat Band.

Starring Erin McCracken as Patsy Cline and Susann Fletcher as Louise Seger and understudying both roles is Jeremy Parker.

Set Design is by Steve Loftus, Lighting Design is by Andrew Gmoser, Sound Design is by Jonathan Hatton and Mark Zuckerman, Costume Coordination by Heidi Giarlo, Hair/wig design by Gerard Kelly.  Steve Loftus is the Technical Director, The Production Stage Manager is Victor Lukas, properties are by Grumpy Props. Lisa Tiso is the Associate Producer. 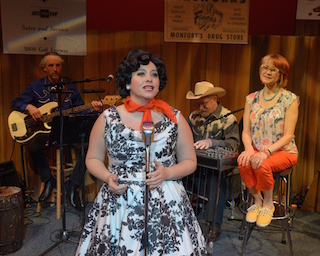 Ticket Prices Dinner & Show range between $56.00 and $84.00 PLUS TAX depending on the performances chosen. Beverage Service & Gratuities are not included in the ticket price. Discounts are available for children, students, and senior citizens at selected performances. Also check the website for on-going Special Offers! More news at: www.BroadwayTheatre.com