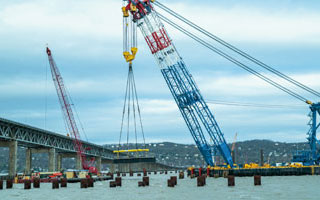 The New NY Bridge project continues its progress alongside the Tappan Zee. Recently, the I Lift NY super crane began its work with a successful first lift towards the end of April. As planned, one of the world’s largest floating cranes successfully completed the first of many enormous lifts for the New NY Bridge project. The operation took place over a three-and-a-half-hour period on the Hudson River between Westchester and Rockland counties.

The I Lift NY super crane hoisted and set one of project’s largest precast concrete pile caps, weighing in at a whopping 600 tons. Design-build contractor Tappan Zee Constructors owns the super crane. Its extraordinary capabilities enable large sections of the bridge to be pre-fabricated off-site and shipped by barge to the construction zone, saving time and money for the project.

The I Lift NY super crane completed its 6000-mile journey from Oakland Harbor, near San Francisco, California, and passing through the Panama Canal to arrive in New York Harbor on January 30th.  In preparation for this project, I Lift NY has gone through months of testing, modifications and upgrades that included a new high-tech computer operating system. All of the rigging cables have been completely replaced as well. Experienced operating engineers received months of specialized training to carefully handle this massive piece of equipment. With spring finally here, the warmer weather has melted the ice on the Hudson River and the I Lift NY crane is carrying out installation of the enormous pile caps. Later this year even heavier structural steel beams that will carry the road deck across the new spans will be positioned into place. The crane has a lifting capacity of up to 1900 tons per instance. After the construction of the New NY Bridge, I Lift NY will continue its role in the project, and will be utilized in the dismantling of the existing 60-year-old Tappan Zee Bridge, further reducing costs and project time. Despite its huge size, this barge-mounted crane provides another benefit. Because it sits high in the water, the need for dredging has been reduced by 50%.

Construction of foundations for a temporary all-electronic toll collection system is underway that will be employed until the permanent system is built in the location of the current toll plaza in Tarrytown.

For those who travel over the span, several weeks of weekday overnight triple-lane closures of the southbound New York State Thruway began Monday, May 4. The Monday-through-Friday closures began as early as 7 p.m. with the closure of one lane near exit 11 to the Tappan Zee Bridge, followed by a second lane closed at 9 p.m. and a third at 10:30 p.m. All lanes reopen at 6 a.m., Tuesday through Friday and 8 a.m., Saturday morning. At least one lane will remain open at all times, except during periodic traffic holds. On the eastbound lane, the current toll for Class 2L vehicles (vehicles with 2 axles under 7’6” in height) at the Tappan Zee Bridge is $5.00 or $4.75 with an E-ZPass at all times, except for those customers that have an individual E-ZPass account with a bridge commuter or carpool plan.  Bob Megna, Acting NYS Thruway Executive Director stated, “The recent approval of a $1.3 billion Thruway Stabilization Fund in the State budget and the record-setting $1.6 billion TIFIA loan in 2013, will help us meet Governor Cuomo’s mandate to keep tolls as low as possible on the new bridge. While we continue to seek more innovative alternate financing sources like these, it would be inappropriate to name a toll task force at this time. Commuters can rest assured there will be no toll adjustment on the Thruway or the Tappan Zee Bridge in 2015.”

According to a news release on The New NY Bridge.com website, “Marine crews continue working on the foundations for the new bridge by placing reinforcing steel and concrete in the piles, main span pile caps and approach span pile caps. The high-strength concrete is made on site by the project’s two floating batch plants.”  These two floating concrete batch plants recently returned to the work site in late March, passing the required tests and resuming concrete pumping for the project. Tappan Zee Constructors, LLC took the batch plants out of service last December after a silo failed. There was no damage done to the River as a result of this collapse, and there are several benefits to the floating concrete plants. “An advanced air-quality system reduces dust escaping from the plants during production and highly efficient ‘clean’ engines reduce the equipment’s carbon footprint. All of the systems on the plant and its support barge are contained to prevent spillage into the river, with all by-products from the cleaning process stored for proper disposal off-site. With fewer evironmental impacts, and less project construction traffic on local roads, the state-of-the-art floating batch plants are crucial to the efficient construction of the New NY Bridge.”

Other planned work activities include formwork that is being erected for the cast-in-place pier columns, which eventually will support the new bridge’s road deck. Periodic pile-driving for the bridge is almost complete, and is restricted to a period from 7 a.m. to 7 p.m. Monday through Friday and noon to 7 p.m., Saturday.
Crews also will continue working on the bridge’s landings at the Rockland and Westchester shorelines. The ends of the bridge span are comprised of steel and concrete, and will serve as strong bases where the new crossing meets the landside roadway.

On the Rockland County side of the Bridge, work continues on concrete placement for foundations near the South Nyack shoreline. The concrete for this work is acquired from local concrete suppliers delivered by truck to the Rockland trestle located off the Thruway’s southbound access ramp. Trucks exit this trestle to the Thruway via the northbound access ramp. Only construction vehicles, providing a safe route directly to the work site and reducing traffic impacts on local roads, use the access ramps.
With boating season once again upon us, it’s important to be aware of rules and restrictions regarding Hudson River navigation. The U.S. Coast Guard has established a Safety Zone surrounding 16-construction barge mooring locations at the project site. Be aware that no unauthorized vessels are allowed in the Safety Zone. To control vessel traffic in areas determined to have hazardous conditions, marine law enforcement will also be enforcing the rules of the expanded Regulated Navigation Areas east and west of the Safety Zone. The RNAs stretch 500 yards north and 500 yards south of the existing bridge. According to information from the New NY Bridge website,  “Boaters are urged to transit the main channel with no wake at a maximum speed of 5 knots and to use extreme caution on the river at all times.”

Mariners also need to be aware that construction work continues in the vicinity of the side channels under the existing bridge. Additional temporary navigational lights have been installed to further define the 600-foot navigation channel under the main span. Permanent elements of the new bridge are lit per U.S. Coast Guard requirements, as are all moorings, barges and other equipment.

Facilitated by Scenic Hudson, a community roundtable workshop took place on Thursday, April 30 at Sleepy Hollow High School at 210 North Broadway. Residents of Tarrytown and Sleepy Hollow were provided with an opportunity to learn about and offer input on new trails and park improvements planned in the two communities. Citizen groups and residents got together to share their ideas for new or improved trails, walking and biking loops connecting with the New NY Bridge and Lighthouse Landing development project. Unsafe crossings were identified and ideas were put forward on how to incorporate them safely into a plan. “Wayfinding” or positioning signage to better direct future users of the trail system was also discussed as a concept for consideration. With the assistance of Scenic Hudson, these community-driven planning groups will collaborate further to make recommendations regarding how the Westchester RiverWalk will traverse the new Lighthouse Landing development in Sleepy Hollow and how connections will be made on and off the New NY Bridge at a future date. Representatives from both development projects were in attendance to share information and hear ideas from the community. Outreach Deputy Director, George Paschalis, represented the New NY Bridge and was on hand to provide assistance on ways to connect the bridge with the other trails. Future workshops are planned in May.

Environmental monitoring plays a major role during the construction phases of this Bridge. Monitoring stations near both the Rockland and Westchester County shorelines are installed as part of the New NY Bridge Project’s Environmental Performance Commitments (EPC). These commitments are intended to monitor, minimize and/or mitigate potential adverse effects related to construction noise, vibration and air quality associated with the Project.
Construction noise is being closely monitored during the construction process. The highly sophisticated monitoring devices installed at locations near the project record the level of the sound and automatically report back to the engineers and display the results online on their website. Other measures used to help mitigate noise levels include restrictions imposed for pile driving, known to be the noisiest element in bridge construction; temporary and movable noise barriers; minimization of back-up alarm systems and restriction of construction times with noise levels of equipment prohibited over 70 dBA (A-weighted decibels, dBA, are an expression of the relative loudness of sounds in air as perceived by the human ear.)

Common construction activities include ground-borne vibration from pile driving, drilling, jack hammering, pavement breaking, and earth moving. In order to monitor these activities, vibration stations are also in place to continuously record data on a real-time basis. Resulting monitoring records are used to measure potential effects to structures or human reaction as the result of ground-borne vibration. As peak particle velocity (PPV) increases there is greater potential to affect structures or be noticeable to humans. PPV recordings are updated on a daily basis.
Air quality is closely observed and The New York State Thruway Authority requires Tappan Zee Constructors, LLC (TZC) to utilize equipment that adheres to very strict standards set by the U.S. Environmental Protection Agency (EPA), which dramatically reduce harmful diesel emissions as compared with earlier machinery. The New NY Bridge project is one of the first in the nation to require such stringent emissions requirements. In addition, the Thruway Authority also includes a host of additional measures to ensure clean air for the region’s residents.
• TZC’s equipment produces far fewer harmful emissions. For example, project construction engines that exceed 100 horsepower emit at least 63 percent less particulate matter, or soot, and at least 56 percent fewer oxides of nitrogen, which contribute to ground-level ozone, or smog.
• The mandatory use of ultra-low sulfur diesel fuel (ULSD), introduced over the past several years, is enabling a large portion of the emissions reductions. ULSD’s sulfur content is 97 percent lower than diesel fuel of the past.
• Tailpipe filters are required on every non-road, non-marine diesel engine exceeding 50 horsepower. Project tugboats and other marine vessels also limit fine diesel particulate matter to less than 3,700 grams per hour, one of the first restrictions of its kind in the nation.

Construction for the New NY Bridge began in 2013, with a total cost estimated at over 5 billion dollars. The anticipated completion of the bridge is 2017, when the 60-year old Tappan Zee Bridge will be permanently dismantled. There are many firsts for this bridge project due to a variety of technology innovations and environmental considerations. In addition, the timing of the construction coincides perfectly with the future development of Lighthouse Landing, enabling community groups and residents the ability to plan for future amenities that positively benefit the area.