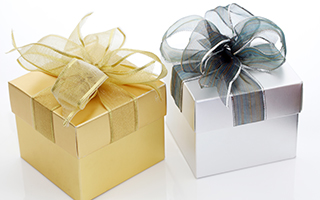 ‘Tis the season to buy stuff and give stuff, and lest we forget, get stuff.   The stuffing is not the problem; it reflects our desire to exchange joy during the holidays, and while that is going on, the economy gets a nice boost.  What can become dangerously tricky is managing the relationship between givers and takers.  This is true year round and not just during the holidays.

Our culture and many of our religious traditions espouse the virtue of giving.  We are told that as givers we are good people and that by giving we will feel better about ourselves.  If only the giving and receiving were just the simple exchange it pretends to be.

What you give and to whom and why can be fraught with tension.  People become very concerned about giving appropriate and meaningful gifts.  When there is a disparity of income between the giver and receiver it can be even more difficult for both.  Too expensive a gift may be seen as showing off or might embarrass someone who might not feel that they can reciprocate. Too modest a gift might appear to be stingy coming from someone who has the means to give more.  There can also be a gender disparity that can create different expectations about gift giving. There are social obligations and gifts to acquaintances of both time and money.  Issues of self worth, as a “good” gift giver, crop up. Being a good gift giver can equate with being a good person (someone with taste, whimsy, and thoughtfulness). Digging deeper into the pathology of giving there is a lot to learn about oneself and others that may not be readily apparent.

Paradoxically, many givers give to get.   Not necessarily physical presents, although that can be the case, but the presents of time, money, attention, and effort.  They may not realize it but the rewards of appreciation and attention a giver receives can become addictive and that addiction can be masked by a sincerely-believed, big-hearted altruism.  Many givers give and give until the point of exhaustion and then when utterly depleted they try to give even more.  They are often so addicted to giving that a deeply felt anger and even terror can be present when they have nothing left to give.  They complain that they are underappreciated, taken advantage of and exploited. Ironically, these givers are often terrible at receiving from others. This can stem from a deep-rooted belief of their own unworthiness and sometimes an unconscious desire to feel superior to the recipient of their largess. Receiving can make people feel vulnerable, no longer bolstered by their self-created identity as a “good” and contributing person.

Then there are the takers.   There are those who are genuinely in need and should not hesitate to accept help from others. However, many takers feel entitled to take whatever they can from whomever they can, especially if they perceive that they are taking from someone who has more than they do, and that does not necessarily mean more money.  There are those who are very generous to friends but take from a spouse or parents with little or no reciprocation or acknowledgements as to the sacrifices they may have had to make. They feel they deserve to be given to.   There is often buried within, an outraged spirit that believes life is not fair and that they got a raw deal or at least not the deal they wanted. Whatever they were not given they are going to take. In their minds, they are heroic, righting a wronged self, meting out justice, not playing the fool, not being vulnerable.

Takers can leave givers feeling betrayed and this can have long-term negative consequences on self-esteem and trust.  Taking is a temporary fix and it soon leaves the takers looking for more opportunities to fill the void. Both giving and taking can have addictive qualities.

According to Dr. Laurentia Ruby, a clinical psychologist based in Fairfax, VA, it is easy to misinterpret takers and it is important not to jump to conclusions about people in your life who seem to fall into that category. “It is important to look at a person holistically.  Do you believe that they are genuinely a good person despite their ‘taking’?  Be careful about attributing malice to them when there is none. There are those who are real thieves but most people mean well and would be shocked to know that they are considered takers.  Often they are not conscious about what they are doing. Some people just don’t have the thought process which allows them to see how their actions affect others.”  She goes on to say that it is important that the “givers” be aware of how they may be instigating the situation by their own need to be a giver.

Dr. Brené Brown, research professor at the University of Houston and author of The Gifts of Imperfection, states, “When I look at narcissism through the vulnerability lens, I see the shame-based fear of being ordinary. I see the fear of never feeling extraordinary enough to be noticed, to be lovable, to belong or to cultivate a sense of purpose.”

According to Doctor Laurentia Ruby, creating clear boundaries that are drawn gently, with compassion and non-judgmentally, has worked miracles in creating healthy give-and-take relationships with her clients.

Perhaps the best gifts we can give each other and ourselves is being conscious of what we are doing or not doing to each other and to take the time to stop judging and truly notice, create healthy boundaries, impart a sense of purpose, and to love honor and respect each other. If you receive a gift you don’t like remember the gift of imperfection that someone has given you. It means you’re off the hook.