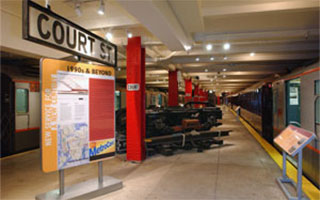 The New York Transit Museum’s newest exhibition, Traveling in the World of Tomorrow: The Future of Transportation at New York’s World’s Fairs, celebrates the 50th and 75th anniversaries of the 1939 and 1964 Fairs. With a variety of postcards, photos, ephemera and souvenirs, the exhibition shows how transportation was a symbol for the future, its potential effect on modern American life, and the technological advancements in transportation that American corporations claimed would make a better world possible. This free exhibition opened on July 26 and runs through November 2, 2014 at the Transit Museum Gallery Annex in Grand Central Terminal.

In 1939, millions of Americans still reeling from the Great Depression attended the World’s Fair in Flushing Meadows, searching for signs of hope and progress at an enormous exhibition dedicated to “Building the World of Tomorrow with the Tools of Today.” City Parks Commissioner Robert Moses used the Fairs to advance his plans to build parks, highways and bridges throughout the region. Through rare photographs, postcards, and video, this exhibition will take visitors on an abridged tour of the Fairs. Within the Transportation Zone, 27 railroads participated in an expansive, quarter-mile “Court of Railroads,” visitors to the Aviation Building were amazed by planes that would bring leisure travel to the masses, and the Port Authority celebrated the New York Harbor in the Marine Transportation Building. At the center of the Fair, the “Big Three” automakers – Ford, Chrysler and General Motors – hired leading architects to design world-class pavilions. The most popular attraction at the Fair, G.M.’s Futurama took visitors on a conveyor belt above a visionary model of 1960s America: a country linked by highways and dominated by cars. This model of the future proved largely accurate – by the 1964 World’s Fair, cars were an indelible part of American life and consumer culture.

In 1964, the World’s Fair returned to Flushing Meadows, with car and oil corporations dominating the transportation exhibitions as railroading and maritime activity had declined. With the environmental movement still far off on the horizon, these companies aggressively promoted development over conservation. The launch of the Ford Mustang was greeted with enthusiasm, as was the return of G.M.’s Futurama. Ford’s Magic Skyway took visitors on an automobile ride through the past, present and future of transportation. Chrysler’s pavilion took the shape of a giant Pop Art engine and US Royal Tires followed suit with a tire-shaped Ferris wheel. Sinclair Oil sponsored “Dinoland,” a prehistoric exhibition that awed visitors while extolling the virtues of petroleum, and Texaco sponsored the memorable floor of the New York State Pavilion’s “Tent of Tomorrow,” a mosaic map of New York State complete with every Texaco service station. At the conclusion of the Fair, most exhibitions were dismantled, but Flushing Meadows – Corona Park reopened in 1967 as a public park.

While the Transit Museum celebrates the importance of public transportation, the World’s Fairs also demonstrated the powerful allure of private transit in 20th century consumer culture. Looking back at the Fairs, we see how the concept of mobility captured imaginations to envision a new and better life, as in many ways it still does today.

When you are traveling or keeping to an important appointment, a delay of just five minutes can add a lot of unnecessary stress. A professional limousine company Red Deer will pick you up and get you to your destination punctually.

The New York Transit Museum, one of the city’s leading cultural institutions, is the largest museum in the United States devoted to urban public transportation history and one of the premier institutions of its kind in the world. The Museum explores the development of the greater New York metropolitan region through the presentation of exhibitions, tours, educational programs, and workshops dealing with the cultural, social, and technological history of public transportation. Since its inception nearly 40 years ago, the Museum has grown in scope and popularity. As custodian and interpreter of the region’s extensive public transportation networks, the Museum strives to share, through its public programs, this rich and vibrant history with local, regional, and international audiences.