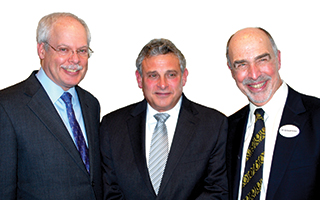 “We are particularly proud that three of the seven doctors honored are members of the Phelps medical staff,” said Keith E. Safian, the hospital’s President and CEO.  “Our congratulations go to all the honorees, but particularly to Dr. Larry Faltz, Dr. Robert Raniolo and Dr. Avraham Merav for these well-deserved recognitions.”

At right, L to R: Drs.  Faltz, Raniolo and Merav

A trauma-trained and board certified general surgeon, Dr. Raniolo has maintained a private surgical practice in Westchester and has been a member of the medical staff at Phelps Memorial Hospital since 1988. In addition to being a well-respected general surgeon, Raniolo is known in the community as a doctor people can talk to about their medical problems – very often having nothing to do with surgery. In accepting his award, Dr. Raniolo spoke about the life experiences that led him to become a surgeon – including his humble beginnings in a tightly knit family, his medical school years in Guadalajara, Mexico, when the care he offered to the indigent was so gratefully received, and his placement in a surgical residency program by a mentor physician who saw his potential. He closed by thanking his family and many friends and colleagues who supported him on his path to becoming and practicing as a general surgeon.

A cardiothoracic surgeon for several decades, Dr. Avraham Merav has performed thousands of open heart and thoracic surgical procedures. He did pioneering work on lung transplantation while at Montefiore Medical Center, where he was Chief of Thoracic Surgery. In addition to being Chief of Thoracic Surgery and Medical Director of Surgical Services at Phelps Memorial Hospital, he is an associate clinical professor of cardiothoracic surgery at Albert Einstein College of Medicine. At Phelps, he recently established the Westchester Lung Nodule Center for lung cancer screening in response to new guidelines that recommend low-dose CT scan screening for high-risk individuals.

In accepting his award, Dr. Merav said his greatest reward has been helping to save, prolong and improve the quality of thousands of lives over several decades and he marveled about the profound
experience of seeing a heart start beating again following a surgical procedure. He mused about receiving a lifetime achievement award when he feels that there is so much more for him to do in years to come.

Lawrence Faltz, MD, MACP, is Senior Vice President for Medical Affairs and Chief Medical Officer at Phelps, where he has been the head of the medical staff since 1994. He was instrumental in founding the Family Medicine Residency program at Phelps, in partnership with New York Medical College and Open Door Family Medical Centers. He was recently appointed as clinical professor of medicine at NYMC.
In addition to his activities at Phelps, Dr. Faltz was Chairman of the Northern Metropolitan Hospital Association’s Patient Safety Institute and is a member of the Quality Steering Committee of the Hospital Association of New York State. He is a Master and former Governor of the American College of Physicians, the national internal medicine specialty organization. In 2009, he completed a 6-year term as the American College of Physicians representative to The Joint Commission Hospital Professional Technical Advisory Committee.

In accepting the award, Dr. Faltz said that his medical advocacy is not for physicians or hospitals – it is for patients, because ultimately it is they who benefit from improvement in the delivery of healthcare.

Phelps Memorial Hospital Center is a 238-bed acute care community hospital in Sleepy Hollow with more than 1,600 employees and 475 medical staff members representing 50 medical specialties. Phelps offers one of the broadest ranges of community hospital services in Westchester. Patients benefit from distinguished physicians, many of whom are pioneers in their field, offering the most advanced procedures using the latest technology.  www.phelpshospital.org 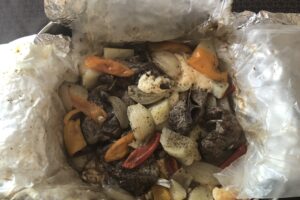 Recipes from Our Diverse Community: Kleftiko Recipe for Repast with Storied Greek Past