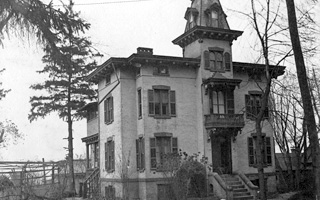 One of the special things about living in Tarrytown and Sleepy Hollow is the intriguing history of the community. It is one of the reasons that many residents have made this portion of the Hudson River Valley their home. Like many of the Rivertowns, Sleepy Hollow and Tarrytown have a local Historical Society building that contains a museum and library dedicated to preserving the history of the two villages. Located in the Grove Street Historic District in Tarrytown, the 1848 Jacob Odell House has been the headquarters of the Historical Society for almost 70 years. Inside this beautiful Italianate house, visitors find an abundance of documents and artifacts that tell stories about our past residents. This collection continues to grow as residents often donate their family papers and artifacts into the care of the Society. Currently, the Society’s wonderful collection of Civil War documents and artifacts is on exhibit.

As with many of our old and beautiful historic buildings, the Jacob Odell House requires constant maintenance and care. While the Society receives some small grants each year, the majority of the funding to preserve the building and the collection inside comes from individual community donations.

Recently, Sleepy Hollow resident Douglas Maass generously offered a series of rare documents to the Society. These are to be sold at auction in order to raise funds for the restoration of the Odell House. The donated documents were once part of the unique collection amassed by his father Richard Maass. The elder Maass was active in banking and politics and served as Westchester County Historian from 1974 to 1981. Over a fifty-year period, Richard Maass collected a variety of historical documents primarily relating to the American Revolution and Colonial New York, as well as many manuscripts. Maass was also a founder of the Manuscript Society, serving as President from 1954 to 1956. A significant portion of the Richard Maass collection of historical documents was donated to his alma mater, New York University, and can be accessed at the Fales Library.

Among the eleven items that will be auctioned in November to benefit the Historical Society’s preservation fund are two very rare documents dating to the 1860s. The first is a bank check in the amount of $2000 drawn on the Howard Bank (of Boston), and dated February 3, 1863. It is signed by Edwin Booth and endorsed by his brother John Wilkes Booth. The second is the last letter written by Mary E, Surratt on the day of her death. Surratt was the boardinghouse keeper in whose home John Wilkes Booth and his conspirators plotted the assassination of Abraham Lincoln. She was convicted and hanged after a military trial, although she protested her innocence to the last. There have always been grave doubts as to the extent of her guilt and most historians today agree that her case was a miscarriage of justice. These two documents will be on display at the Society until the end of October.

For information about the planned auction or about donating items to benefit the Historical Society’s preservation fund, please contact Sara Mascia at historyatgrove@aol.com or 914-631-8374. ©