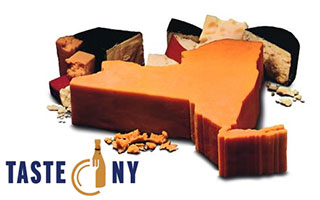 Taste NY is part of a concentrated effort by the Governor to boost the sales and heighten the profiles of New York State’s food and beverages.

This builds on the MTA recently introducing New York-made wine, beers and distilled spirits on the bar carts that refresh commuters on the Long Island Rail Road and Metro-North Railroad every day at both Penn Station and Grand Central. The products are being promoted with “Taste NY” signage on the carts and have been selling briskly since being added to the carts’ inventories last month.

“Taste NY is all about highlighting the world-class food and beverages that are produced all across New York, which supports tourism and economic activity in communities around the state,” Governor Cuomo said. “Opening a Taste NY store at Grand Central Terminal – one of the state’s most iconic and frequently utilized transit locations – is a great way to showcase the wealth of products that New York’s agricultural industry has to offer and encourage travelers to explore what they’ve been missing.”

“Grand Central is an established midtown tourist and shopping destination as well as transportation hub,” MTA Chairman and CEO Thomas F. Prendergast said. “With the explosive interest in artisanal and craft foods and beverages and New York’s long tradition of wine and beer-making, the time is right for the producers of New York’s great foods and beverages to break into and tap this great marketplace of commuters, travelers, tourists and shoppers.”

A competitive request for proposals began several weeks ago by Metro-North seeking operators for the store, which will join the roster of diverse high quality retail outlets in the terminal, which receives more than 750,000 visitors on the average day. The Taste NY store will be the largest outlet yet in a program initiated this year by Governor Cuomo to promote the State’s fine foods and the products of the State’s wineries and breweries.

The request for proposals targets the state’s wineries and other retailers as potential operators of this first stand-alone “Taste NY” shop. Governor Cuomo visited the New Baltimore rest area on the New York State Thruway which has dedicated Taste NY space for the sale of New York State food items.

Local Rotary Clubs Contribute to the Worldwide Eradication of Polio